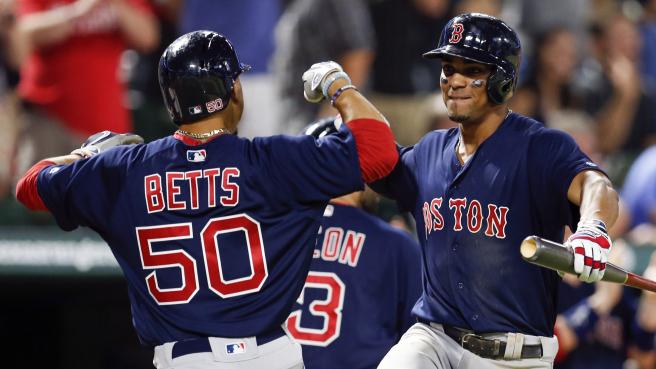 David Price got absolutely rocked by the best team in the American League on Friday night.  Two and a third innings, 12 hits, six runs.  It was by far his worst outing in a Red Sox uniform.

When Price was pulled from the game in the third, Boston was trailing 6-0.  After they had just dropped three out of four to the White Sox in a series that included some of their most crushing losses of the year so far, there really wasn’t much hope at this point despite how early it was.

In the top of the fourth, Hanley Ramirez hit his seventh home run of the season and his second in three games to cut the lead to 6-2.  In the bottom of the fourth, Prince Fielder went deep off Matt Barnes to stretch the Rangers’ lead to 7-2.

Jackie Bradley Jr. moved into the top eight in the Majors in home runs with his 13th of the year off Nick Martinez in the sixth, making it a three-run game at 7-4.

It would stay that way until the top of the ninth when Sandy Leon improved his batting average to .524 in 21 at-bats with a two-out RBI double, driving in JBJ and making it a two-run ballgame.

The next batter was Mookie Betts, and he reminded everyone why he’s one of the best players in baseball with arguably the biggest home run of the year so far for the Sox:

The Red Sox capped of their four-run ninth inning comeback by taking an 8-7 lead when Dustin Pedroia scored on a wild pitch by Matt Bush with David Ortiz at the plate.  Papi then popped out to end the inning, but the damage had been done.

In the bottom of the ninth the Sox relied on 41 year-old Koji Uehara, who gave up two home runs in the eighth inning to blow a lead against the White Sox in his last outing on Wednesday.  This time he turned back the clock to 2013 and struck out the side to seal the win:

For the second night in a row, the Sox pulled out a win in the ninth inning.  It was only the second time all year that they’ve won a game when trailing after the eighth.

Winning games when your back is against the wall is a good sign for a baseball team.  Finding a way to win when your best pitcher gets lit up is also a positive.  After losing seven out of 10, the Sox have now won two games in a row in dramatic fashion.  They’re one and a half games behind the AL East leading Orioles.