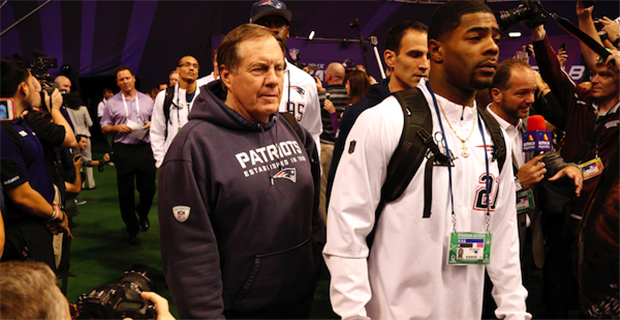 Whether you like it or not, Bill Belichick’s unwillingness to share any information about the inner workings of the Patriots organization has proven to be effective throughout his 18 years as their head coach.

Over time, we became accustomed to his monotone, condescending, unenlightening answers to any questions that don’t concern what’s happening in the present.  It was part of the “Patriot way”, where everyone’s focus was on nothing but the next opponent.  Sure, it was obnoxious,  but after five Super Bowl parades it became harder and harder to be bothered by his lack of personality at the podium.

Until now.  It’s been six months, and there has been no explanation for the absence of Malcolm Butler in Super Bowl LII.  A guy who gifted Belichick his fourth ring as a head coach in 2014, made the Pro Bowl in 2015, helped the team to their fifth title in 2016, and led the team in defensive snaps in 2017.  Most importantly, he’s someone who was fully capable of making enough of a difference to change the outcome against Nick Foles and the Eagles.

Belichick is one of the greatest coaches of all-time.  His track record speaks for itself, so that’s not really up for debate.  Unfortunately, none of his past success can overshadow the fact that benching Butler for the entirety of the Patriots’ loss to the Eagles less than six months ago was one of the worst coaching decisions in Super Bowl history.

Training camp has begun and it’s a new season.  But, rightfully so, the questions haven’t stopped.  On Wednesday, Dan Shaughnessy made sure that Bill remained on the hot seat by reminding him that nobody has forgotten about what happened, and nobody will.  No matter how many times he mumbles the words “we’re focused on the 2018 season”, there will still be fans, media, and players continuing to search for answers.  Including Malcolm Butler himself.

Despite not getting any closure before departing for Tennessee, Butler continues to take the high road when fielding questions about Belichick, saying there’s “no bad blood” between he and his former coach.  Meanwhile, Bill can’t be bothered to speak on the situation.

We can’t let him off the hook.  As fans, we’re also focused on the 2018 season, but that doesn’t mean we’ve stopped wondering what the hell was going through this guy’s head last February.  To all of the reporters out there with press credentials, don’t give up the fight.