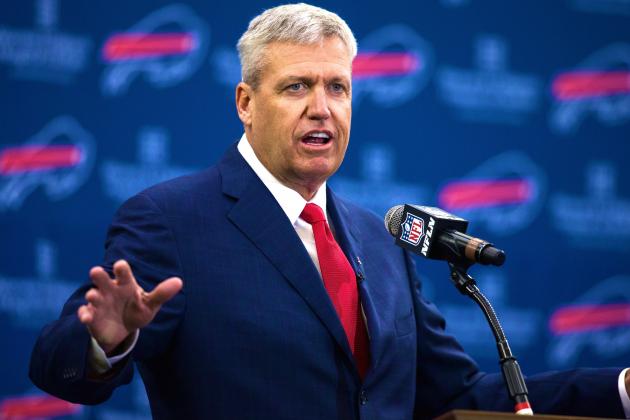 There was a time when Rex Ryan posed a threat to the New England Patriots.  In 2010, his New York Jets, led by Mark Sanchez, defeated the Pats in the divisional round of the playoffs on their way to their second consecutive AFC Championship game.

Ever since that game, Rexy hasn’t had much to brag about when it comes to his match ups with the greatest coach and quarterback in NFL history.  But it wasn’t until this year that the Patriots continuously kicking his teeth in started to affect his confidence.

What has made Rex so entertaining over the years is how completely delusional he can be.  When he was the head coach of the Jets, his record against the Patriots didn’t matter.  He wasn’t phased by the fact that the Patriots had dominated the AFC East for the better half of two decades.  In Rex’s eyes, the New York Jets were always the team to beat.

Going into the 2014 season, the Pats had won the AFC East 10 of the last 11 years.  About a month before the year began, Rex was asked if he spends a lot of time focusing on New England:

Fast-forward seven months and Brady and Belichick win their fourth Super Bowl while the Jets finished at the bottom of the division with a  record of 4-12.  No matter how much Rex hyped them up, it’s safe to say that the Patriots were not worried about the Jets.

This was just one of many instances in which Rex Ryan was out of touch with reality during his stint with the Jets.  I’m sure Pats fans can recall many more.

If you ask Rex Ryan about the Pats nowadays, however, you’ll notice his tone has changed a little.

He is no longer posing as if he is Tom Brady’s kryptonite and he appears to have begrudgingly accepted that the division that he has coached in for the last six plus years does indeed run through New England.

He recently called Bill Belichick the best coach ever, admitted that he’s not going to win the division and basically gave up trying to answer questions about the Patriots:

“You guys write that I’ve lost (eight) of (nine), so why are you even talking to me. I obviously have no clue how to attack them or defend them, so you guys should talk to somebody else who has a better record than I do against them.”

Here’s what he had to say about the Pats leading up to Monday night’s match up in Foxborough:

“Everybody is chasing the Patriots,” he said. “I mean, right now they are undefeated; they are playing great. They’ve pretty much been playing lights out the last 10 years. … Obviously, you get tired of it. It is about time for us to go ahead and get some victories.”

It’s hard to pinpoint when exactly Rex Ryan realized that he’s not in the same stratosphere as the Patriots.

What I do know is that this down-to-earth, reasonable Rex is not the Rex that I’m used to.

It’s always fun beating a Rex Ryan led team, but it was even more fun when he would make ridiculous pregame claims like “we think we can beat the Patriots” only to watch quarterback lose a fumble by running into an offensive lineman.