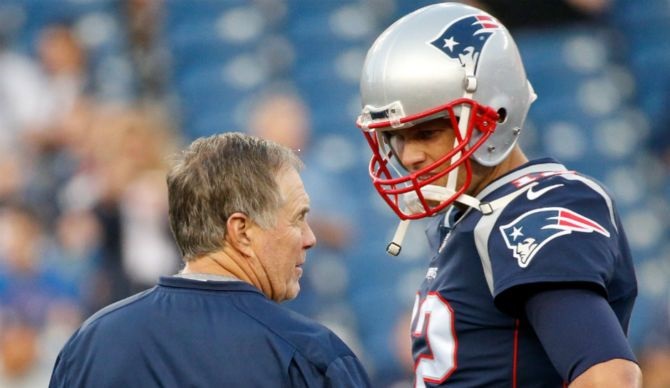 The New England Patriots have created the greatest dynasty in NFL history over the last 17 years by consistently dominating on both sides of the ball.

Now when I say “dominating”, I don’t mean winning every week.  They tried to do that once and we all know how that ended.  And after an embarrassing 42-27 loss to the Chiefs at Gillette on Thursday night, all the premature talk about an undefeated season this year is out the window.  And that’s probably a good thing.

Aside from 2004, all of the Patriots Super Bowl teams have lost games in September.  In fact, there have only been three instances in the Brady/Belichick era where the Pats have won their first four games of the season.  2004, 2013, and 2015.  The 2004 team was the only one that ended up winning the Super Bowl.

I’m not saying that losing in Week 1 is the key to winning the Super Bowl, but the Patriots have historically used September as a month to find their weaknesses and eliminate them so that they can turn it on when the games really start to matter.  In other words, it’s an extended preseason.

I know what you’re thinking, every game matters.  True, but how many teams have started seasons 4-0 or 3-1 but were nowhere to be found on the first Sunday in February?  Scrub teams love to inflate their egos during the first month and convince themselves they’re contenders until the real teams start to get serious.

On the other hand, how many times have we overreacted to a September loss only for the Pats to run the table at the end of the season and find themselves back in the Conference Championship or Super Bowl?

The Patriots are a combined 43-17 in September during the Brady/Belichick era.  That’s pretty damn good, until you consider that they’re a combined 102-26 in the regular season after the start of November.  43-17 vs. 102-26.  That is absolutely absurd and it’s the reason why no one should be panicking right now.

Now giving up 40+ at home is unheard of for the greatest coach/quarterback combo of all-time.  But so was losing 41-14 to the Chiefs in Week 4 of 2014 or losing 31-0 to the Bills in Week 1 of 2003.  In case you haven’t realized it yet, the team that came back from a 25-point deficit in the Super Bowl seven months ago is fairly adept at making adjustments after getting their teeth kicked in.  We’ve seen it so many times that I have hard time believing any Patriots fan is remotely concerned at the moment.

So let the Bills, Jets, and Dolphins enjoy being “ahead” of the us in the standings for a couple days.  And just know that Bill is kicking everyone’s ass in practice this week to make sure that what happened on Thursday never happens again.  The Blitz For Six is alive and well.