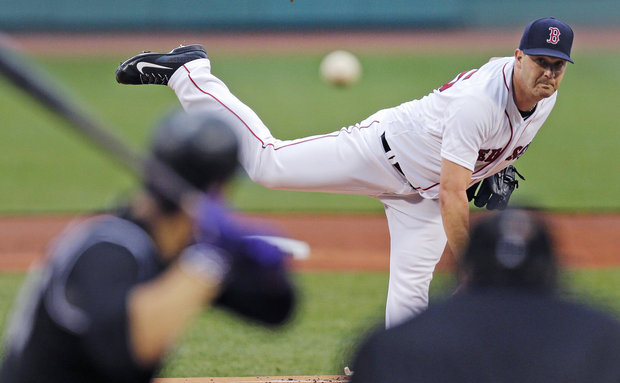 Another day, another blowout win for the Red Sox.

They poured it on again Wednesday night in a 10-3 rout of the Rockies at Fenway, banging out 13 hits.

Jackie Bradley Jr. extended his hitting streak to 29 games with a 2-for-4 night.  He’s now tied with Johnny Damon (2005) for the fourth longest streak in team history and is five games behind Dom DiMaggio’s record.  As far as Dom’s brothers record, well we won’t go there yet.

JBJ also surpassed Xander Bogaerts for the AL batting average lead.  He and X are one and two, hitting .350 and .349 respectively.  Bogaerts did hit a solo shot in the fourth to extend his own hitting streak to 18 games so he has nothing to complain about.

The fifth best average in the AL belongs to David Ortiz at .333.  He helped his cause again Wednesday night by going 1-for-3 with a couple RBI’s to tie him with Robinson Cano for the AL lead with 43.

Blake Swihart appears to be a great fit in left field and he’s starting to hit like we know he can.  He’s tied for the third most triples in the AL after hitting two in Wednesday night’s win and coming away with two RBI’s.

The Sox also got a surprise performance from Marco Hernandez who went 2-for-2 and scored two runs.  Unfortunately the reason he was in the game was because both Bogaerts and Dustin Pedroia left with injuries.  Hernandez was put in at second to replace Pedroia and then moved to shortstop went Bogaerts was pulled.

Ryan Hanigan also left the game with an injury, but the good news is that all three players should be okay and were just taken out of the game for precautionary reasons.  You can do those kinds of things when get out to big leads like the Sox have been recently.

Despite all of this production from the bats again, the player of the game Wednesday was Steven Wright.  Wright made it into the eighth inning and allowed just two earned runs.  His record may not look like much at 4-4 but the knuckleballer is tied for the sixth best ERA in the AL at 2.52.

The Sox will try to sweep the Rockies Thursday night, but Clay Buchholz is on the hill so we’ll see how that goes.