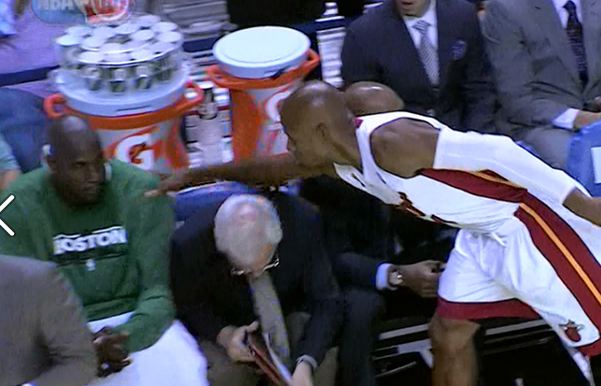 Ray Allen recently commented on the NBA MVP race, saying he favors Isaiah Thomas.  Why?  Well, according to Ray, some of it has to do with the fact that he’s “biased because it’s Boston”:

IT for MVP? Celtics in ECF? Ray Allen doing his best to win back Celtics fans.

Ray Allen can talk all he wants about his alleged bias towards Boston.  But if he really cared about the Celtics, he wouldn’t have taken less money to go to their most hated rival five years ago.  He can try all he wants to win back the city, but real fans won’t forget that feeling when he stabbed us in the back and joined the Miami Heat after they had just bounced the C’s from the Eastern Conference Finals in a hostile seven-game series.

And it’s not just the fans.  Ray’s Boston teammates have yet to forgive him either.  In a recent interview with The Undefeated, Rajon Rondo revealed that he was organizing a 10-year reunion for the Celtics’ 2008 championship team.  Rondo says he received a majority vote to not invite Ray Allen on the vacation:

“I asked a couple of the guys. I got a no, a no head shake,” said Rondo when asked why Allen wasn’t invited.

What he said next was probably the best thing anyone has said about the situation since it happened in 2012.  If you think Celtics fans should be over it by now, consider this:

“It will be a long story about that, but it is what it is,” Rondo, who plays for the Chicago Bulls, told The Undefeated. “I don’t know a good analogy to put this in. It just wasn’t the greatest separation. It wasn’t the greatest thing that could’ve happened to us as a team, a bond. We were at war with those guys [Miami]. To go with the enemy, that’s unheard-of in sports. Well, it’s not so unheard of. It’s damn near common now.

“The mindset we had. The guys on our team. You wouldn’t do anything like that. It makes you question that series in the Finals … Who were you for? You didn’t bleed green. People think we had a messed-up relationship. It’s not the greatest. But it’s not just me. I called and reached out to a couple of other vets and asked them what they wanted to do with the situation. They told me to stick with what we got [without Allen].”

That “Who were you for? You didn’t bleed green” line is precisely why Kevin Garnett and Paul Pierce deleted Ray’s number out of their phones after he left.  And it’s 100% true.  Pierce, KG, and Rondo bled green and were all-in for banner 18.  The only thing they wanted was to bring another championship to Boston.  Ray Allen showed that he couldn’t care less about any of that.  In return, the Celtics fans and teammates who used to support him couldn’t care less about him either.

What’s worse is that he showed absolutely no respect towards his “friends”, Pierce and KG, when he decided to depart.  Here’s what Pierce said about the situation last year:

“I tried to call him and I didn’t get any return calls before he signed with Miami. That was our rival. We were brothers. We came in together. We just wanted a heads-up or a ‘what’s on your mind?’ or something like. Then, all of a sudden, he left. That was the biggest disappointment on my end. Not even getting a callback at that moment.”

So that’s that.  Ray Allen is selfish and deserves to be ignored by the teammates who he chose to ignore when they tried to contact him about possibly staying in Boston.  I’m not sure if his teammates will ever find it in them to forgive him, but five years later is way too soon to even think about that.  He didn’t only lose his chance to have #20 raised to the Garden rafters, he’s lost his chance to attend any team reunions until further notice.  If he had any sense on how to maintain a meaningful relationship, he wouldn’t have gotten himself in this mess in the first place.