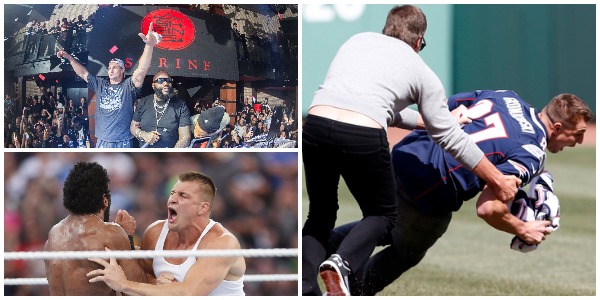 He may not have appeared in the last eight games of the season including the playoffs, but we can still expect another vintage “Summer of Gronk” after the Patriots’ Super Bowl win two months ago.

From chugging beers at the victory parade to partying with Rick Ross (which resulted in Ross throwing up on stage) to getting hype with The Rock, it’s already been quite an eventful off-season for the Pats’ tight end.  But in the past week he’s managed to take things to another level.

First he posted this video to his Instagram showing him getting his buddy Mojo Rawley ready for WrestleMania:

Then he stole the show at the actual event, helping Mojo win the title:

I know absolutely nothing about WWE and WrestleMania but it just makes so much sense that Gronk would be into this kind of thing.  Seems like his type of venue.  One thing I do know is that I’ll never get tired of watching this guy do crazy shit.

At Red Sox Opening Day at Fenway on Monday, Gronk gave us a classic moment in Boston sports history.  As Brady was displaying his Super Bowl jersey that was recently recovered in Mexico, he snatched the jersey and led TB12 on a chase to the outfield:

If this moment didn’t put a smile on your face, you’re just not a Boston sports fan.  Here’s to more great footage of Gronk living it up this summer.  Now cue all the fun police who think he should stay in his house covered in bubble wrap so he doesn’t get hurt again.