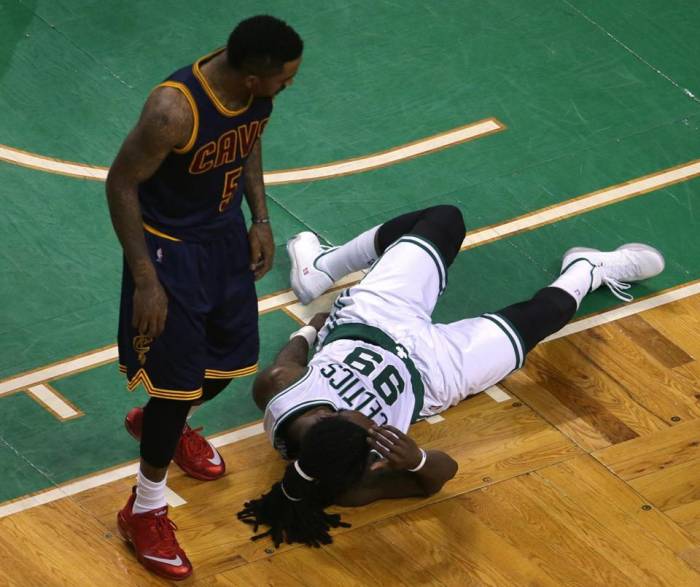 As we all know, the recent series between the Celtics and Cavs was a bit of a bloodbath.  Highlighted by the game four slug fest, the series had a kind of edginess to it that’s been absent from the NBA in recent years.  The mayhem in game four began when Kelly Olynyk, in a desperate attempt to get a rebound (he sucks at boxing out), accidentally pulled Kevin Love’s arm out of it’s socket.  Unfortunately, the injury turned out to be serious and Love is likely to miss the remainder of the postseason.  This caused a ripple effect of violent outbursts from Cleveland, the first of which included Kendrick Perkins pushing Jae Crowder to the ground by his throat.  Crowder jumped up with intentions to go after Perkins but was separated by his teammates.  Believe it or not, this play resulted in a double technical, which is is ridiculous for two reasons.  One, Kendrick Perkins absolutely should have been ejected.  I don’t think anyone would debate that.  My other complaint is why the hell did Jae Crowder get a tech for this?  Was he not supposed to retaliate after being mauled for no reason?  People have the audacity to say that Olynyk’s play on Kevin Love was dirty but this was far worse as the intent was never in question.  You almost have to feel bad for Perk at this point.  A few years ago he was the starting center on a championship team and now he has to grab people by the throat in order to make headlines.  I seriously had not heard his name mentioned once the entire series until this incident.

The dirty plays continued when JR Smith took another cheap shot at Crowder.  I’m not sure why Cleveland had it out for Jae, but I’m guessing his aggressive style of play was starting to get under their skin.  For me, his edginess is the reason why he’s now one of my favorite Celtics, but it appears his opponents aren’t as appreciative of him.  This one wasn’t as surprising as the Perkins attack because everyone knows JR Smith isn’t the friendliest guy.  When you couple that with his adolescent level of maturity, incidents like this one are bound to happen.

Anyway, suspensions for these altercations were handed out recently and they’re a little confusing.  JR Smith was suspended for the first two games of the Eastern Conference Semi Finals and Kendrick Perkins was suspended for ZERO games and received a $15,000 fine.  So what the NBA is saying is that if you punch someone in the face you simply have to sit on the bench for two games.  And if you grab somebody by the throat and shove them to the ground, you’re allowed to participate in the next game.  I hate Ron Artest just as much as the next guy but I’m pretty sure he used to get some pretty hefty suspensions for similar episodes.  His elbow to the head of James Harden a few years ago had him riding the pine for seven games.

So why such a light suspension for these Cavs players?  The answer is simple, really.  They play alongside The Chosen One.  Anyone who’s watched the NBA the last few years has probably noticed that the league tends to favor Bron Bron.  The Cavs have already lost Kevin Love, and having JR Smith out for more than a couple games would practically diminish any hope of LeBron winning another title this year.  The NBA can’t have that.  They need the face of their league to continue to build his legacy and they’re more than willing to help him along the way.  This has been evidenced throughout his career by the absurd amount of foul calls he draws and the shockingly low amount of fouls he has committed.  For example, despite the aggressiveness that was on display from both teams in game four, LeBron was not called for a single defensive foul.  I remember reading a few years ago during the playoffs that the Miami Heat had only been called for three technical fouls through the first three series’ of the playoffs while Heat opponents had been whistled for 23.  This happened to be the year that LeBron went on to win his first ring.

So while the JR Smith and Kendrick Perkins’ suspensions/fines may seem a little generous, just know that there is a reason for it all, and that reason is so the King can continue to sit on his throne. It’s Bron Bron’s world and we’re just living in it.

PS: Olynyk got suspended for the first game of next year, and I’m 100% sure that wouldn’t have happened if Kevin Love didn’t get hurt.  But he did, so I’m not surprised.