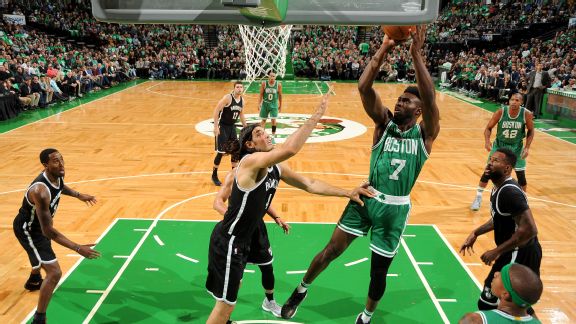 The Celtics began their season with a back-to-back, opening up against the Nets in Boston on Wednesday and traveling to Chicago to take on the Bulls Thursday night.

On opening night at TD Garden, they blew out Brooklyn for three and a half quarters.  Then Brad Stevens tried to finish the game with his bench and a 20-point lead became a five-point lead in a matter of minutes.  He was forced to bring the starters back in and luckily they were able to hold off the Nets and hang on for a 122-117 win.

Traveling to Chicago to play the Bulls in their home opener the next night wasn’t going to be an easy task.  The C’s weren’t able to overcome the Chi-Town fans, who are understandably fired up at the moment, as well as Dwyane Wade playing his first ever game for his hometown team.  It came down to the wire but D-Wade put the nail in the coffin with a couple clutch threes down the stretch, leading the Bulls to 105-99 victory.

Here are the biggest takeaways from the first two games of a long 82-game regular season:

Isaiah Thomas is still Isaiah Thomas.  If anything, he’s gotten better.  IT is averaging 25 points and 6.5 assists in the first two games, shooting an impressive 58.7% from the field.  He’s an elite player with the ball in his hands and there’s a good chance he’ll end up in the All-Star game again this year.  Unfortunately, his lack of size will continue to limit him on the defensive end.

Al Horford has been underwhelming.  Now I know it’s only two games and I’m not ready to overreact yet, but he has about a week to stop putting up Jared Sullinger numbers before I start ripping into him.  He’s not getting paid $113 million over four years to average 11 points and six boards.  Of course he’s still a huge upgrade over Sully on the defensive end, but that’s the least we could ask for.

Jae Crowder is hitting shots.  For now.  We know all about Crowder’s ability to defend, but his offense tends to come and go.  Through the first two games he’s averaging 17.5 PPG on 61.9% shooting.

Jaylen Brown can ball.  I actually have no idea what people were talking about when they said this guy has issues with his jump shot.  He’s shooting 63%, averaging 8.5 through the first two games.  Not only does his form look solid, he’s making shots that would make you think he’s been in the league for 10 years.  I could watch this bank shot all day:

Jaylen Brown is a smooth operator on the block! The rook makes this turnaround bank shot look easy: pic.twitter.com/VBQ7jTtNaA

Rebounding could be an issue.  I feel like we say this every year about the Celtics.  Al Horford was supposed to help us in that department so, like I said, if he’s going to average six per game then we’re in big trouble.  The C’s are undersized down low and their only two seven footers (Tyler Zeller & Kelly Olynyk) couldn’t grab a rebound to save their lives.  They were crushed 55-36 on the boards in Thursday night’s loss to Chicago.  Avery Bradley is the team’s leading rebounder so far, which is obviously unacceptable.

On the bright side, it’s still October and we have the same record as the Golden State Warriors.  The Celtics will look to get back over .500 on Saturday night when they take on the Hornets in Charlotte.  Tip-off is at 7 pm.