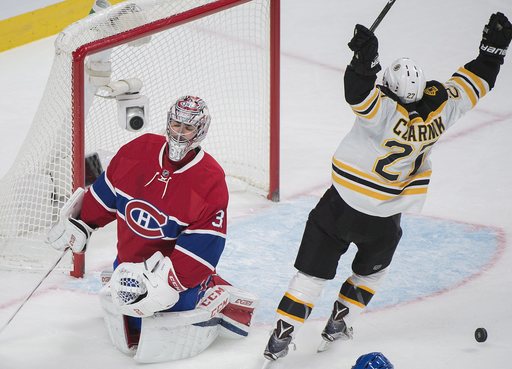 It’s a shame that Monday’s Bruins game against the Canadiens in Montreal conflicted with the Patriots’ showdown against the Ravens, because the B’s gave us their best effort of the season.

Last Thursday, the Bruins lost 4-2 at home to the Colorado Avalanche.  Just two days later, the Canadiens absolutely demolished that same Avalanche team by a score of 10-1.  Then, two days after that, the B’s were somehow able to beat the best team in hockey in their own building by a score of 2-1 thanks to this game-winning goal from Ryan Spooner in overtime:

After a scoreless first period, Austin Czarnik put the B’s up 1-0 in the second with his third goal of the season.  That’s where the game would remain until just over three minutes remaining in regulation, when the Canadiens’ Paul Byron tied things up with his 10th of the year to ultimately force OT.

Just a minute in, David Krejci scored what was thought to be the game-winning goal but it was called off due to goalie interference by David Pastrnak.  Then Spooner put the Habs away with 1:40 remaining in the three-on-three sudden death OT.

Tuukka Rask continues to be strong as he stopped 30 of the Canadiens’ 31 shots.  The B’s improved to 16-12-2 on the year, good for third in the Atlantic division.  They’ll take on the Penguins in Pittsburgh on Wednesday, 7:30 pm ET.