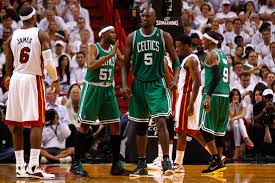 Tonight marks the first time that Lebron has played against the Celtics in a Cavs jersey since we ran him out of the playoffs and out of Cleveland in 2010.  That game was in Cleveland.  Tonight they’ll match up at The Garden.  Here’s what Bron Bron had to say about playing in Boston:

Reason number one million why LeBron will never compare to Michael Jordan or Larry Bird or Magic Johnson or any of the all-time greats.  None of those players would have ever referred to crowd noise as “adversity”.  To MJ, adversity was playing with the flu and puking at halftime.  In Bron Bron’s world, playing through adversity is dealing with a noisy crowd because they might throw off his rhythm or say some mean things to get in his head.  Once again Lebron proves that although his skills are on par with the legends of the NBA, his mental toughness is several notches below.  Makes you wonder how many rings he would have if he didn’t have the thinnest skin in professional sports.

Anyways, I love that his memories battling the Big 3 are still fresh in his mind.  You know he still has nightmares about KG and Pierce destroying his hopes of bringing a ring to Cleveland two out of three years before he decided he couldn’t beat them and joined an all-star team.  Even then, the old, injured, and depleted Celtics pushed Bron Bron to the limit, taking the Heat 7 games in the 2012 ECF.  And I don’t want to say that the refs bailed the Heat out of that series but the refs bailed the Heat out of that series.  My point is that throughout Lebron’s career, no team has created more “adversity” for this obnoxious prima donna than the Celtics and they continue to haunt him to this day, as he explained back in May of this year.

If you’re going to the game tonight, be sure to make as much noise as possible and create as much adversity as you can for Lebron.  Throw in some trash talk too, he doesn’t like when people are mean to him.