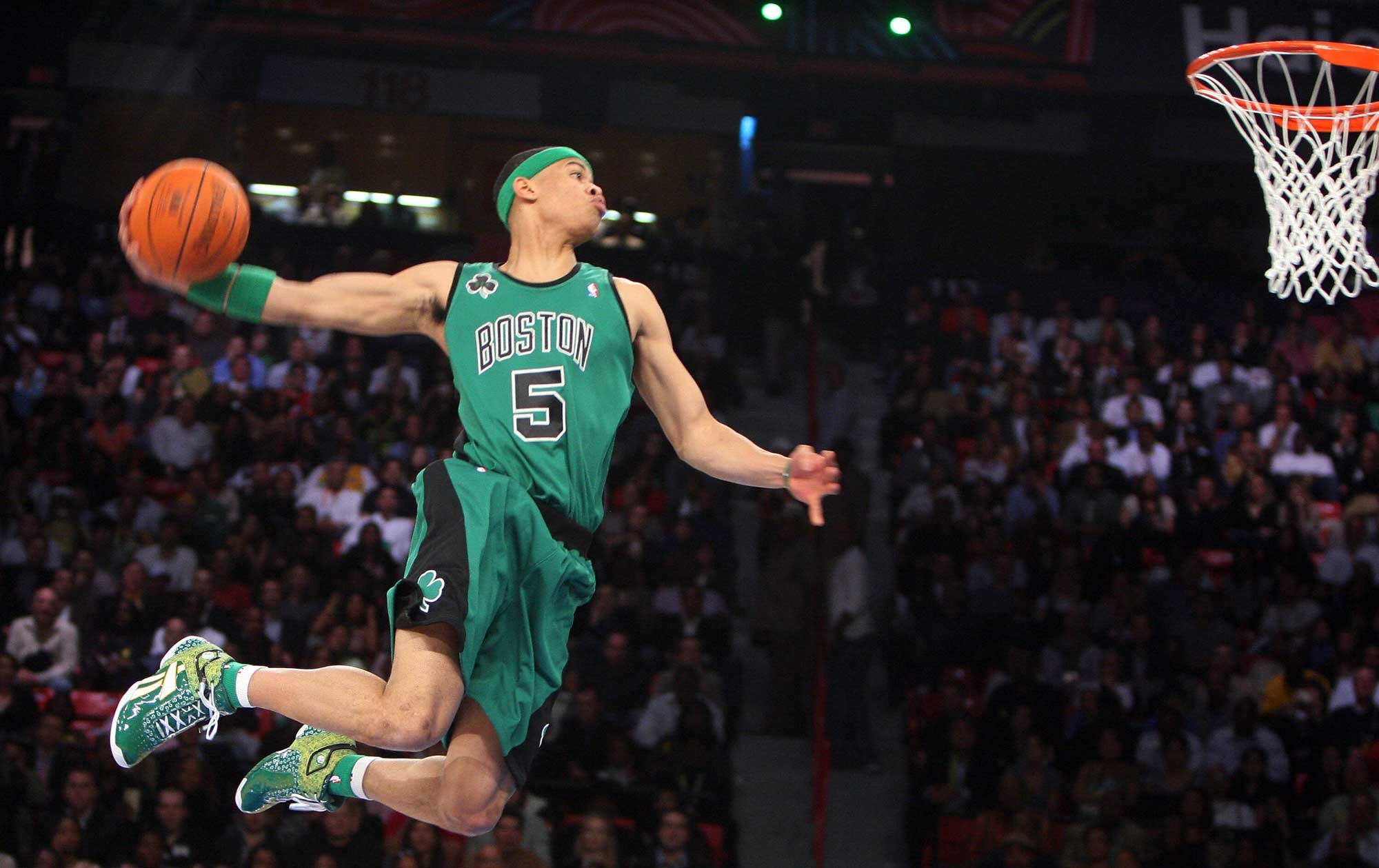 News broke Saturday that the Celtics will be signing free agent Gerald Green to a one-year deal.

After being drafted 18th overall by the C’s in 2005, Green spent the first two years of his career in Boston, and if it weren’t for his Slam Dunk title in 2007 and a few Sportscenter Top 10 throwdowns, he would have been an easily forgettable player.

In his rookie year, he appeared in just 32 games, averaging 5.2 points per contest.  Leading up to his second season in 2006-07, there was hope among Celtics fans that Gerald would take on a bigger role and become an important piece of the team’s future.

While he did see a huge increase in playing time, appearing in 81 games and starting 26, it didn’t result in the type of production that we anticipated.  The 6’7″ guard/forward managed to put up 10.4 points per game but shot just 41% from the field.

The highlight of his Celtics career, and also the highlight of that atrocious 24-58 season, came during All-Star weekend when Green became the first Celtic since Dee Brown to win the NBA Slam Dunk Contest.  He did so by wearing a Dee Brown jersey and emulating Brown’s famous no-look dunk while jumping over Nate Robinson.  With some assistance from Paul Pierce, the Celtics stole the night:

Then there was this completely disrespectful, unnecessary, incredibly awesome alley-oop assisted by Tony Allen in the final seconds of a 14-point win over the Raptors:

After an underwhelming two seasons, the summer of 2007 saw the Celtics deal Gerald Green to the Timberwolves along with Al Jefferson, Ryan Gomes, Sebastian Telfair, Theo Ratliff, cash considerations, a 2009 draft pick and the 2009 first-round pick that they had originally acquired from Minnesota in exchange for Ricky Davis and Wally Szczerbiak.  In exchange, the Celtics got Kevin Garnett and a 17th championship banner.

In his post-Celtics career, Green’s disappointments continued for a few more years.  Halfway through the 2007-08 season, he was dealt from the Timberwolves to his hometown Houston Rockets after averaging 5 points per game on just 33% shooting in Minnesota.  His time in Houston was short, as he appeared in just one game and was released just a couple weeks later on March 8th.

He spent the rest of the season out of the league until the Dallas Mavericks decided to give him another chance by signing him to a one-year deal on July 1st, 2008.  Unfortunately he wasn’t able to capitalize on the opportunity, averaging 5.2 points per game on 43% shooting in his 39 games with the Mavs.

At this point it seemed that Gerald Green was definitely not cut out for the NBA.  In December of 2009, he signed with PBC Lokomotiv-Kuban of Russia before being waived six months later.

After a couple years away from professional basketball, he was given another chance in the NBA when the Lakers signed him on December 13th, 2011.  Nine days later, right before the lockout-shortened season began, they released him.

On December 28th, Green signed with the D-Fenders of the NBA D-League.  He played for them for just two months, averaging 19.1 points per game and being named a D-League All-Star.  On February 27th, the New Jersey Nets signed him to a 10-day contract.  After showing major improvements over his last stint in the NBA, he was signed to a second 10-day contract and eventually signed for the rest of the year on March 18th, 2012.  In his 31 games with the Nets, he averaged 12.9 points per game on a career-high 48% shooting.

In the summer of 2012, he signed with the Indiana Pacers, who were getting ready to contend for an Eastern Conference title.  Green’s production once again dropped in the 2012-13 season as he shot just 36%.  In the summer of 2013, the Pacers traded Green, Miles Plumlee, and a first-round pick to the Phoenix Suns in exchange for Luis Scola.

In his two years with the Suns, Gerald Green’s basketball career was revived.  The 2013-14 season started with two of Phoenix’s best players, Goran Dragic and Eric Bledsoe, both going down with injuries.  Green was inserted into the starting lineup and he took full advantage.  When Bledsoe went down again in January, Green became the team’s leading scorer.  His impressive performances included 36 points in a win over the Nuggets and 41 points (including eight three-pointers) in a win against the Thunder.  He ended the season with a career-high 15.8 points per game and finished fourth in the NBA Most Improved Player Award voting.

After an okay year with the Suns in 2014-15, Green signed with the Miami Heat last summer.  In his debut with Miami, he dropped 19 points off the bench in a 104-94 win.  In a win against the Knicks on November 27th, he scored 25 points while starting in place of an injured Luol Deng.  On April 1st, he started in place of an injured Dwyane Wade and poured in a season-high 30 points to lead the Heat to a 112-106 victory over the Kings.

When he was shipped to Minnesota nine years ago, Gerald Green was nothing but a disappointment to Celtics fans.  Nine years later, this is a signing that everyone should be happy with.  It took a long time and a lot of moving around, but Green has finally found his place in the NBA.  He’s improved his discipline and shot selection, and at this point in his career it’s clear that he’s capable of being a solid scorer off the bench for a good team.  Look for him to replace what the Celtics lost when Sixth Man of the Year candidate Evan Turner signed with the Trail Blazers a few weeks ago.