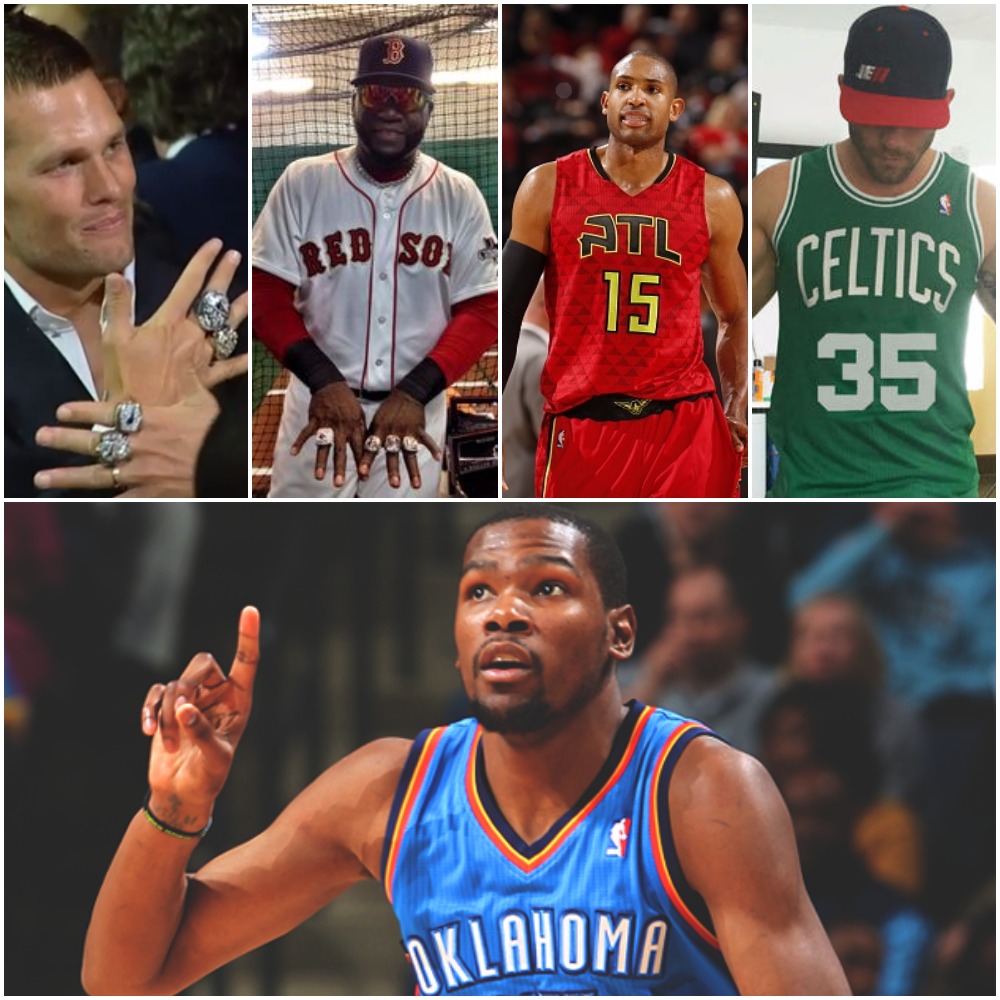 Getting Kevin Durant to Boston has become an all-out effort by the entire region of New England and Celtics fans all over the world.

On May 31st, Isaiah Thomas tweeted “35” with a clover next to it and then promptly deleted it.  When asked what the motives were behind that tweet, IT made it clear that he was on a mission to bring KD aboard:

“I just wanted the world to know, that’s who I’m trying to get,” Thomas said. “I just thought it was something nice to do for the world to see.  But I didn’t think it was gonna be as big as it got.”

The tweet came shortly after the Thunder had been eliminated from the Western Conference Finals, so Isaiah wanted to give Durant some time to get over the loss before he started recruiting:

“I definitely want to give him some time,” Thomas said. “I know that was a tough series and a long season for him. I wouldn’t want anyone calling me up about the biggest decision of my life right after the season’s over. So I’ll probably give him some time and casually talk to him, and then go all-in.”

At the time we weren’t quite sure what “go all-in” meant, but a month later it’s become clear.  The endless recruitment efforts by Thomas, the rest of the Celtics, their fans, local businesses, and other Boston athletes has been impressive and a perfect embodiment of how dedicated New England is to their sports teams.

About a month before Thomas made these comments, new Patriot Terrance Knighton also let everyone know that he was all-in on KD.  Knighton and Durant have been good friends for a few years now, and Pot Roast made it known that he was going to be in the former MVP’s ear about joining him in New England:

On June 9th, Legal Sea Foods did their part by offering KD unlimited crab legs if he chooses to sign with the C’s.  Roger Berkowitz, the company’s president and CEO, delivered this message:

“17 World Championships and endless king crab legs? We think it’s time KD takes a closer look at Boston as his next home. Whether we serve them to him steamed or braised, this is our civic responsibility.”

On June 25th, we found out that the Celtics will at least have a seat at the table and possibility to land KD when it was announced that he would be meeting with six teams including the C’s.

A couple days later Inez Ritch, the mother of the late Celtics legend Reggie Lewis, said she would be okay with the Celtics giving Kevin Durant her sons number 35 if they were able to land him:

“I don’t think it would take anything from Reggie because his number is still hanging up in the Garden,” Ritch said. “If I see Durant running up and down the court with the No. 35, I don’t know how my emotions would be until it happens.  I don’t think I would be upset about it. I think it would be a good thing because he is a very nice, humble young man. I don’t know a lot about him, but I know of some of the things he has achieved while wearing the No. 35.”

As if this weren’t enough, Danny Ainge and the Celtics organization did absolutely everything they could to make sure they were prepared for their meeting with Durant.  On June 29th it was announced that Celtics legends Paul Pierce and Bill Russell would be present for the meeting, which was to take place on July 2nd in the Hamptons.

The day of the meeting, a photo surfaced depicting Tom Brady walking through the Hamptons with Danny Ainge, Steve Pagliuca, Marcus Smart and Kelly Olynyk (Jae Crowder was also there):

Had heard Celtics might use local firepower to recruit KD. Appears they’re bringing Tom Brady to meet w/ him: pic.twitter.com/7QQKbZLCrx

If a four-time champion and arguably the greatest athlete in the history of one of the greatest sports cities in the world can’t convince Kevin Durant to come to Boston then so be it.  Having Brady at the meeting was comforting because it assured us that the Celtics were doing absolutely everything in their power to acquire him.

At this point there was one thing left to do.  Sign a big-name free agent to become a more attractive team for KD by upping the talent.  Danny Ainge responded to that challenge by pulling off the biggest free agent signing in Celtics history.  More importantly he addressed the team’s glaring lack of a post presence, getting four-time All-Star center Al Horford to agree to a four-year, $113 million deal.

As a three-time champion in Boston himself, David Ortiz also contributed with this tweet before the meeting began:

Yo @KDTrey5 sorry I couldn't make the meeting today but Brady will tell u they don't call Boston the City of Champions for nothing ???

After everything was over, multiple sources reported that TB12’s performance in the meeting was just as good as we all expected:

Source on Brady visit with Durant: "Tom did a very good job today."

Brady active in the Durant meeting. Said someone privy to meeting: "Tom told him what it's like to play in Boston, how special it is."

On Sunday, Brady’s buddy Julian Edelman threw in his two cents on Instagram while Durant wrapped up his final meetings and settled down to make a decision, which will reportedly come sometime on Monday:

And there you have it.  Now we just sit and wait.  I want to thank all of Celtics Nation across the globe for their efforts in this perhaps desperate attempt to bring in a franchise-changing superstar.  Win, lose, or draw, we gave it everything we have.  We already broke the stigma that the Celtics can’t attract big time free agents with the signing of Horford.  Al even admitted that the reason he came to Boston was the passionate fans.  To the players, the management, athletes from all the sports teams, local business, and all of the fans who have been pushing to bring #KDToBoston for months before it even became semi-realistic possibility, you’ve done your job.  If he decides not to join us at this point, we have no one to blame.