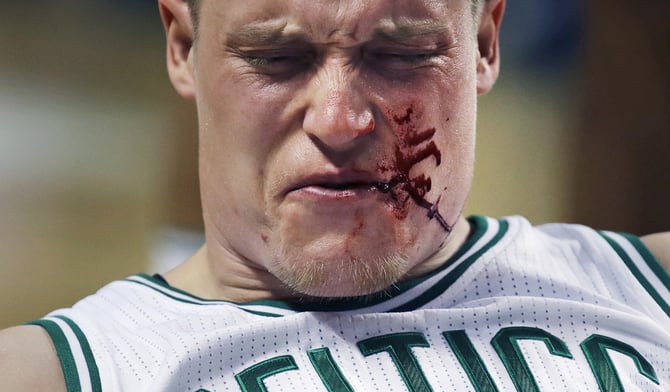 The Celtics’ 120-109 win over the Houston Rockets at TD Garden Wednesday night was their biggest of the year for a multitude of reasons.

After winning 13 of 16 to establish themselves as one of the top teams in the East, the C’s had lost three in a row and were in desperate need of a statement game to get back on track.  That’s exactly what they got on Wednesday when they welcomed the NBA’s third best team into their building.

After finding themselves in an 11-point hole in the second quarter, thanks in no small part to three bogus technical fouls (typical NBA refs), the C’s fought tooth and nail with Houston the rest of the way.

As always, Isaiah Thomas was the star of the show.  The Little Guy had 38 points, which doesn’t even seem like a lot anymore.  He also contributed 9 assists and 5 rebounds.  Check out the highlights here:

Things got especially chippy in the closing minutes of the fourth with the Celtics up two, when James Harden hit Jonas Jerebko with a supposedly unintentional backhand that forced Jonas to leave the game and get four stitches.  Jerebko was ticked off that he got bloodied up without a foul call so he got up with a head full of steam before his teammates calmed him down:

This kind of energy and passion is exactly what KG was all excited about in this legendary interview with the late, great Craig Sager.  Physical wins like this can go a long way for your team’s morale and chemistry:

Another guy who plays with passion, Jae Crowder, continues to produce at a high level ever since some Celtics fans cheered for Gordon Hayward a few weeks ago.  If you don’t believe me, I mentioned this in my tweet last week that was featured on the CSN halftime show and Scal agreed with me.  Crowder continued his recent hot-streak with a double-double in Wednesday’s win, finishing with 23 points, 10 rebounds, and 4 assists.

Al Horford narrowly missed a double-double himself, adding 20 points and 9 assists.  He also had 3 steals.

On top of ending their losing streak, the C’s have been getting some help from around the league.  The Raptors have lost five in a row to fall to 28-18, which means the 27-18 Celtics only trail them by half a game for the two seed in the East.  The Cavaliers have lost seven of their last 11 and are now just three games ahead of the Raptors and three and a half ahead of the Celtics.  Basically, we lucked out.  Losing three in a row isn’t so bad when the two teams you’re chasing are doing even worse.

Looking at the bottom of the league, the Brooklyn Nets continue to be our best friends as they blew an 18-point lead to the Miami Heat Wednesday to fall to 9-36.  They now have six less wins than any other team in the NBA.

The C’s will try to start a new win streak on Friday night as they’re back at the Garden to take on the Orlando Magic.  Tip-off is at 7:30 pm ET.