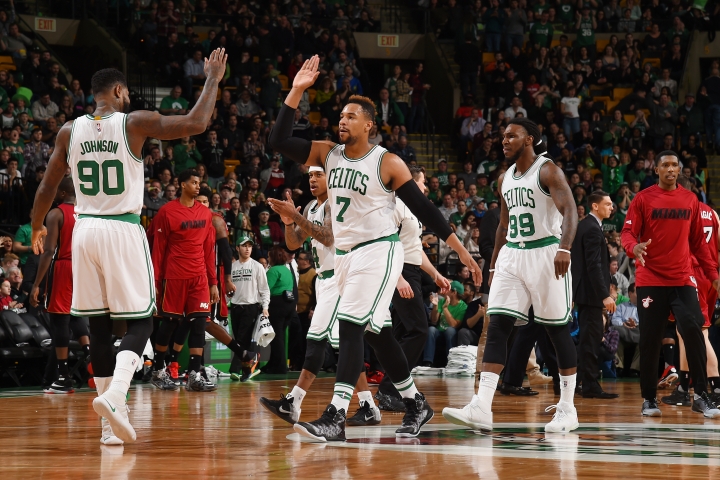 The Celtics have now won 10 games in a row at the Garden and are 16-6 in their last 22 games after defeating the Heat 101-89 Saturday afternoon.

Everyone who played for the C’s in this game was able to make a solid contribution.  They had six different players in double figures.  Amir Johnson had the Celtics lowest scoring total (besides Terry Rozier who only played three seconds) with five points, but he was still able to grab nine rebounds and block two shots.

The second least points came from Jonas Jerebko with eight, but he shot 3-5 including a huge three down the stretch in the fourth quarter to tie the game at 82.  Jonas also contributed four rebounds and two assists in his 20 minutes on the floor.

The third least was Avery Bradley with nine.  AB had a disappointing game offensively but played solid defense on Dwyane Wade despite playing through pain after rolling his ankle.

Besides those three, every Celtic reached double digits.

Their leading scorer was Marcus Smart who finished 15 points, six rebounds, and three assists to go with his lockdown defense.

On the offensive end, Crowder made up for his 0-6 shooting from three by going 6-9 from inside the line plus four rebounds and two assists.  His defense was impeccable as usual as he recorded a game-high five steals and improved his average to 1.73 per game, good for 14th best in the NBA and putting him only 0.1 out of the top 10.

ET just missed a double-double with nine assists and he also grabbed six rebounds and one steal.  He also hit some big buckets in clutch situations, which has become the norm for him.

Tyler Zeller continues to run the floor as well as any big man in the NBA.  Every time there’s a fast break when he’s in the game, he’s guaranteed to be the first guy up the court.  He finished the game with 12 points, three rebounds, and a blocked shot.

The most impressive part of this win was the fact that it came in a game in which Isaiah Thomas had one of his worst offensive performances of the year, going 4-17 from the field on his way to only 12 points (he averages 21.6 per game).  He also only dished four assists, although they were some gorgeous dimes.  Regardless, he played his ass off and he did manage to come up with a steal.  Most importantly, he seemed way too excited about his teammates’ great performances to dwell on his bad game.  That’s a true team player.

The Celtics winning a huge game on a day when their lone All-Star struggled to produce just speaks the depth of this team and their refusal to back down from any challenge.  Normally when doing a recap I wouldn’t post the stat line of every player that saw the floor, but the point is that every Celtic who got in the game made a solid contribution.

This win over the Heat puts them two games ahead of Miami and safely in the three seed in the Eastern Conference with 22 games remaining in the regular season.

The C’s will look to get revenge against the Jazz on Monday night at 7:30 in Boston.