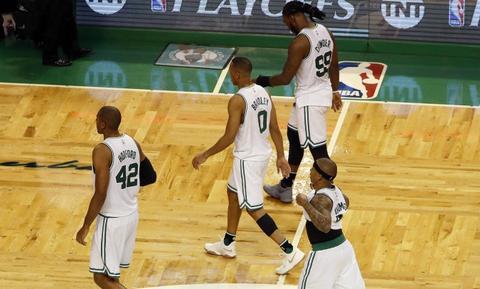 Heading to Chicago down 2-0 after losing the first two games at home, the Celtics are on the verge of potentially being swept by the Bulls in the first round.

They wouldn’t be the first 1-seed to lose to an 8-seed.  It’s happened five times in the history of the league.  But two of those five times were in lockout-shortened seasons where there weren’t really enough games to truly determine who the best teams were, and one of those two was the 2012 Bulls who lost Joakim Noah and prime Derrick Rose to injury during their first-round series against the Sixers.

None of these five series’ ended in a sweep.  If the Celtics were to get swept in the first round after having the third worst record all-time by a 1-seed, they would undoubtedly be the worst team to finish first in their conference in NBA history.

I guess this shouldn’t surprise us.  As a fan, you’re always going to feel confident in your team when they manage to finish a season with the best record in their conference.  But if you watched these guys all year, you know that they have no shortage of flaws.

The Celtics have been one of the best regular season teams in the East ever since they acquired Isaiah Thomas 26 months ago, but they’re now 2-10 in the postseason.  That’s because of two things: lack of rebounding, and lack of a secondary scorer.

It’s no secret that the C’s are weak on the boards and have been for a while now.  The best rebounder on the team this year was Al Horford, whose 6.8 per game was only good for 41st in the NBA.  That’s right, there isn’t a single top-40 rebounder on the Celtics.  As a result, they’ve been out-rebounded 96-74 through the first two games of the series.

As for not having a secondary scorer, we’ve seen how detrimental that can be come playoff time.  It’s happened the last three seasons.  Teams double Isaiah down the stretch of close games in the postseason and there isn’t a single guy who can pick up the slack.  IT is averaging 26 through the first two games, and the next best scorer is Horford averaging 13.  After that it’s a crap shoot.

So here we are.  The second 1-seed in NBA history to go down 2-0 in the first round, and the first since the series was extended from a best-of-five to a best-of-seven in 2003.  For a team that defied odds all year, they’re suddenly breaking all the wrong records.  They’ll need a miracle in Chicago this weekend to avoid going down as the worst 1-seed anyone’s ever seen.