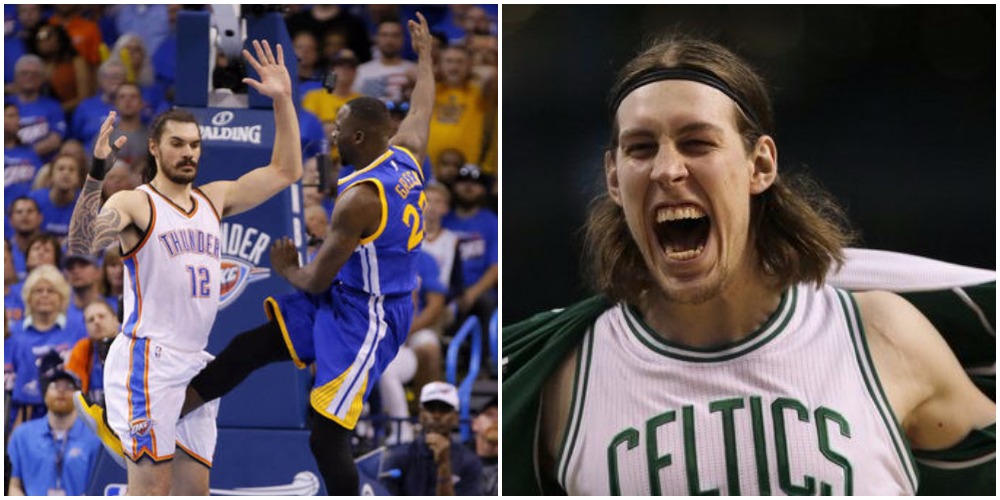 Draymond Green has been exceptional throughout the 2017 NBA Playoffs.  For a guy who’s normally looked at as a high-end role player on a team of superstars, Green has suddenly become Golden State’s biggest weapon in the postseason.

The 6’7″ forward has raised his level of play so much that he now has the confidence to run his mouth even more than usual, which most of us didn’t know was humanly possible.

Since he entered the league four years ago, Draymond Green has gained just as much notariety for kicking players in the nuts and disrespecting legends as he has for his production on the court.  There aren’t too many guys who have earned a five-minute YouTube video of their dirtiest plays.

Then you have guys like Kelly Olynyk.  The number one complaint about Kelly from Celtics fans is that he’s too soft.  Not physical enough down low.

No disrespect to KO, there are some things he does particularly well.  But roughing guys up isn’t one of his strengths.  There was that instance with Kevin Love two years ago, but if you think Kelly intentionally pulled Love’s arm out of its socket then you’re severely overrating this guy’s fighting abilities.  Who even knows how to do that?

Yet Draymond Green, the undisputed Dirtiest Player In The NBA, somehow has such a minuscule amount of self-awareness that he actually called Kelly Olynyk a dirty player.  Here are Draymond’s comments from his podcast on Sunday:

Draymond Green says Kelly Olynyk is a dirty player: "I don’t respect guys like that."

Of course this is in reference to Olynyk’s incident with Kelly Oubre Jr. on Thursday night.  Oubre was suspended one game for attacking Olynyk, which Oubre alleges was a result of some hard screens set by the 7-footer.  In other words, Oubre needs to man up.

I respect what Draymond Green is doing on the basketball court right now, but it’s being overshadowed by his increasingly obnoxious attitude.  He’s been complaining to officials after absolutely every single call made against him.  He’s calling other players dirty with no regard for his own reputation.  He even claimed that he never kicked anyone in the balls even though it’s on video for all of us to see.  My best advice is to rename that podcast to “Dray’s World” because he’s clearly on a different planet than the rest of us.