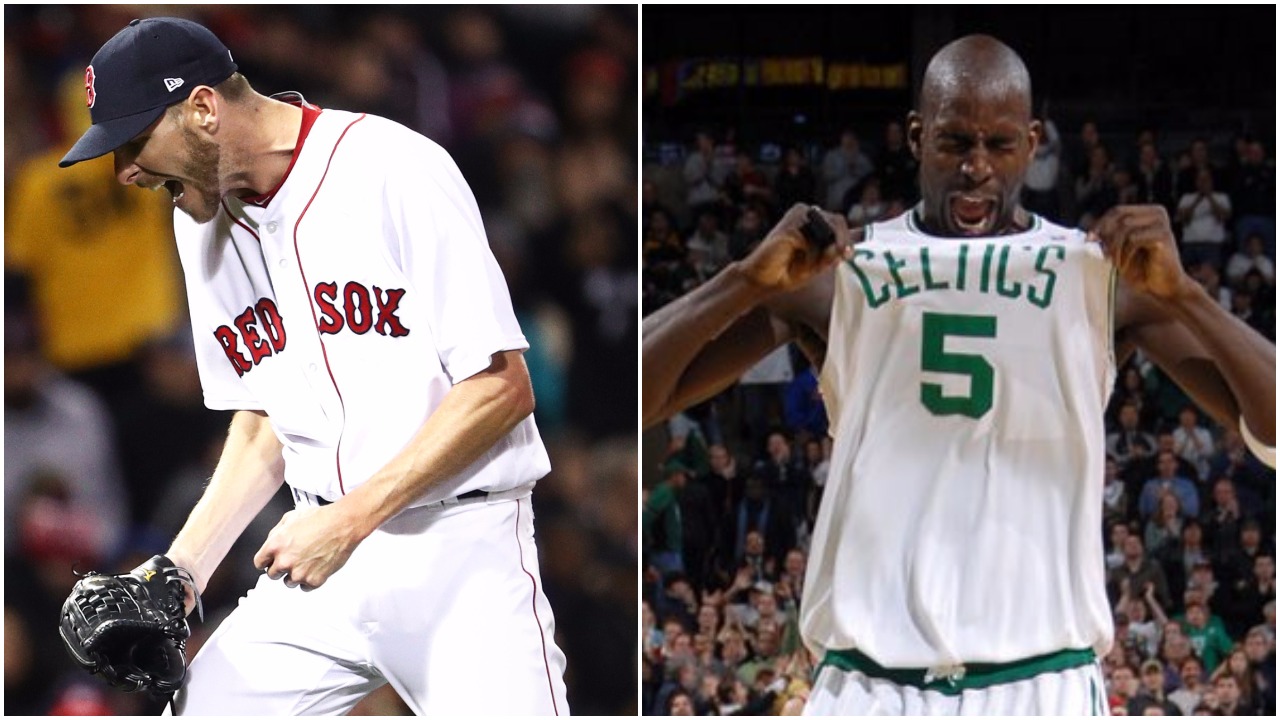 Almost exactly a decade ago, Kevin Garnett threw out the first pitch at Fenway Park prior to an Orioles-Red Sox game.  He had just been acquired from the Minnesota Timberwolves to complete the Celtics’ new Big Three and was already a fan favorite in Boston.

“Man, I need to get some ice,” Garnett joked after he came off the mound. “I wasn’t nervous, or afraid, just anxious.”

KG came to Boston with a humble attitude and made it clear that he had one goal in mind and was thrilled to be in a position to achieve that goal.  This all became evident in his first press conference after joining the team:

“I wouldn’t go that far to say that we’re the team to beat, cause we still have things to prove. We still have to work on chemistry, and bonding, but like I said we’re gonna be a force to be reckoned with. I will say that.”

What made Celtics fans immediately confident in Garnett was his awareness of the sacrifices that were necessary in order for everything to work.  He wasn’t concerned with personal accolades:

As a former MVP and 10-time All-Star in 12 seasons in Minnesota, Celtics fans felt like they had hit the lottery when KG came to town.  With the high expectations of the Boston fans and media, anyone with that sort of resume comes with a lot of weight on their shoulders.  But for someone with the drive and the competitive nature of Garnett, that weight becomes an advantage because it pushes them to be the best they can be.

That’s why he was able to adjust and succeed right away.  Defensive Player of the Year and NBA Champion in his first season after the deal.

Ten years later, there’s another guy on the mound at Fenway who’s displaying the same character traits and reaping the benefits.  His name is Chris Sale and he was acquired by the Red Sox in a trade with the White Sox last December.

Sale spent seven seasons in Chicago and left as a five-time All-Star and five-time Cy Young finalist.  Again, lofty expectations were inevitable.  But his determination and selflessness were reminiscent of Garnett in 2007:

“I’m not going to sit here and say this or that about the ‘ace’ tag,” said Sale. “I don’t think that matters. I think when you have a group of guys that come together that believe in the same thing and fight for the same purpose, nothing else really matters. We play for a trophy, not a tag.”

Four and a half months into the season, the results are doing the talking for Sale.  He was the American League starter in the All-Star Game last month and halfway through August he has the most wins (14) and the best ERA (2.51) in the AL.

Based on their mannerisms, you might say Sale and Garnett are both fueled by anger.  The reality is that once anyone reaches a certain level of competitiveness, it becomes possible for anger to creep in.  But that isn’t the only thing that motivates them:

“I’m competitive,” Sale says. “I would say there might be a little bit of anger. But I just really like competing. I really like it. It’s fun.”

According to his father, Allen, Chris’ competitive fire wasn’t only evident on the baseball field. “He has that intensity if he’s playing ping pong with his mother,” Allen said.

Garnett’s intensity also wasn’t limited to his respective sport.  Doc Rivers and Brian Scalabrine have recently shared the story of when he upset Glen “Big Baby” Davis in an arm wrestling match and proceeded to shout that he’s “the alpha male” on the team.

There’s a fine line between intense and psychotic, and both Sale and Garnett have straddled that line in the past.  Paul Pierce recalled the time when KG swatted a plate of food out of the hands of someone on the team staff because he had the nerve to try to eat before the players:

“So, I remember we jumped out of the shower. Guys got dressed, and it was time to eat. And there were like some people who weren’t on the team in there — like, some doctors who we hardly ever see. We see them making a plate with the players’ food, and I just remember going over there. Kevin Garnett was over there, and he kinda knocked the plate out of his hand and said, ‘This is the players’ food!’”

Then there was Chris Sale last season cutting up the White Sox’ throwback jerseys with a knife because they were uncomfortable and he had made it clear that they shouldn’t wear them on days he starts:

“When I saw that there was something in the way of that 100 percent winning mentality, I had an issue,” he said. “I tried to bring it up and say, ‘Hey listen, these are my thoughts and concerns,’ and they got pushed away because of the business deal that was set in place. I’ll never understand why we need to do something on the business side on the field that might impede us winning a game.”

The similarity in these situations is that both of these guys are extremely dedicated to their craft and dedicated to winning.  Therefore they’re creatures of habit.  If KG is used to getting his meal right after a game, then you better not saunter up to the buffet table before him.  If Chris Sale feels that he can’t pitch to the best of his ability while wearing a big baggy throwback jersey, then he better not see those jerseys waiting for him in the locker room before his start.

The important thing is that both of these guys compete for all the right reasons.  And as long as the scoreboard is in their team’s favor at the end of the game, they’re happy.

It’s not easy coming to Boston as a big-name athlete, dealing with all of the attention, and living up to the hype.  Many have failed.  Carl Crawford, Pablo Sandoval, Chad Ochocinco.  The list goes on.

Kevin Garnett and Chris Sale have set the precedent for how to excel in Boston when the entire city is leaning on you to be the next big star and help bring home another championship.  Sale doesn’t have the ‘ship yet, but he’s already proven he has the “grit and balls” (as KG would say) to use all of the attention as a means to fuel his unbreakable will to win.

That’s the key to succeeding in Boston as someone who’s already established themselves as a star somewhere else.  It’s something that can’t be taught, you either have it or you don’t.  And you won’t know whether or not you have it until you’re thrown into the fire.  Next up, Brandin Cooks and Gordon Hayward.