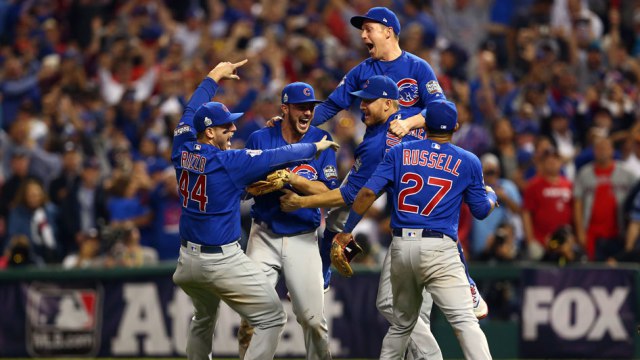 The Chicago Cubs ended a 108 year drought by winning the 2016 World Series over the Cleveland Indians.

Much can be said about the resilience of Terry Francona and the Indians, navigating through the postseason missing two of their best pitchers (Carlos Carrasco and Danny Salazar) and when healthy, one of the most productive players in baseball (Michael Brantley).

The Cubs were clear favorites from nearly start to finish during the 2016 season. The Indians, were underdogs in every post season series.

Cleveland, with home field advantage in hand due to the American League winning the MLB All Star game, tipped the World Series odds slightly in their favor while taking the field. After one batter, Cleveland would only have better than 50% odds of winning in 10 of the 89 plate appearances.

Top of the 1st- Dexter Fowler, who spurned the Baltimore Orioles in Spring Training immediately flipped to odds in the Cubs favor by blasting Cory Kluber’s 4th pitch of the night for a Home Run.

Bottom of the 3rd- Coco Crisp leads off with a double to tilt the odds of winning slightly in the Indians favor. Carlos Santana ties the game with a single, and Jason Kipnis follows with a sharp groundball that handcuffed Cubs shortstop Addison Russell. Russell recovered and frantically flipped to Javier Baez, who had the ball bounce off his fingertips for his 2nd error of the game.

Top of the 4th- Kris Bryant scores after Rajai Davis’ slight hesitation on a fly ball to center field that 95% of the baseball world wouldn’t have even considered. Bryant’s aggression would pay off again later in the game. Wilson Contreras follows with a rocket off the wall in right center field pushing the lead to 3-1.

Top of the 5th- Javier Baez chases Kluber with a leadoff solo home run. With 2 outs, Kris Bryant coaxes a walk from Andrew Miller (6.6 K/BB ratio). With 2 strikes and 2 outs on Anthony Rizzo, Bryant gets a phenomenal jump from 1st allowing him to score on a base hit down the RF line.

Bottom of the 5th- With 2 outs, Carlos Santana walks. Joe Maddon summoned not only a new pitcher, but a new catcher as well. A 50 foot single by Jason Kipnis compounded by a throwing error by (just entered) catcher David Ross breathed slight life into the Cleveland crowd. One wild pitch and two runs later, the Indians are back in the game with a fighting chance.

Top of 6th- David Ross, who homered off former Cub first baseman Mark Grace for his first major league home run, took Miller deep. The momentum had turned back in the Cubs favor, at least until the 8th inning.

Bottom of the 8th- Aroldis Chapman, coming off a 20 pitching outing in Game 6, where Maddon decided to bypass an infantry of bullpen options with a 96% chance of winning relieved Jon Lester with the Cubs holding a 94% chance of winning Game 7. Brandon Guyer laces an RBI double, Rajai Davis fouls off 4 pitches before choking up and barrelling a 97 mph inside fastball over the fence to tie the game. Chapman’s average velocity going into Game 7? Over 100mph. During Game 7? “Only” 97 mph.

Top of the 9th- Progressive Field is rocking. JR Smith is shirtless (again). Jason Heyward reaches on a force play with Javier Baez at the plate. On a 3-1 count, Heyward breaks for 2nd while Baez swings through the pitch. Yan Gomes fires to 2nd where the ball takes a skidding hop, ricochets off Jason Kipnis’ leg into shallow left center field, and Heyward advances. The Cubs have the go-ahead run at 3rd with one out. The Cubs have a 95% chance of scoring the run. Joe Maddon inexplicably has Baez bunt with a 3-2 count. With Baez out after fouling off the bunt attempt, Francisco Lindor makes a sparkling play up the middle to end the inning.

RAIN DELAY- Chapman sets down the Indians in order in the 9th.

Top of the 10th- Albert Almora advances to 2nd on a sacrifice fly to CF by Bryant. Quickly weighing their options, the Indians decide to walk Rizzo to hopefully end the inning with a double play. Zobrist doubles, and after an intentional walk, Miguel Montero drives in an insurance run.

The Indians scratched out a run in the bottom of the 10th, but with two outs, the odds were never significantly changed.

The story of this game was that Chicago had this game almost entirely in hand. After being the consensus best team in Major League baseball, they were statistically favored to win in all but about 11% of the game (starting with 2 outs in the bottom of the 8th until the game entered extra innings). Francona managed nearly flawlessly to put Cleveland on the brink of breaking their own World Series drought. Despite Maddon’s maddening decision making (why take Kyle Hendricks out? Why have Baez bunt?), the Cubs World Series Championship was well deserved.