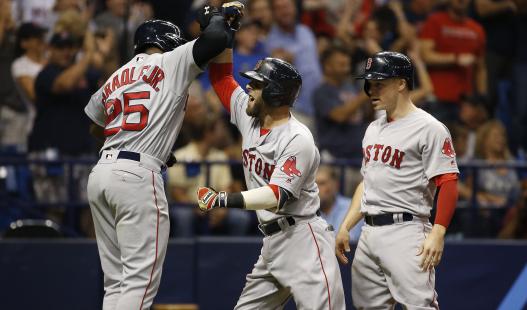 The Red Sox entered September in a tight race for the AL East, and with three days left in the month they have a stranglehold on the division.  This is due to the fact that they’re currently sweeping every team in their path and find themselves on a remarkable 11-game win streak.

The Sox start up a three-game series against the Yankees in New York on Tuesday, just one win away from clinching the division.  Less than two weeks ago, their current streak began against the Yankees at Fenway thanks to a walk-off homer by Hanley Ramirez.  Before that game, we all anticipated that the AL East race would come down to the final weekend of the season when the Sox host the Toronto Blue Jays.  Now here we are with two more series’ still to play and it could all end with one win at Yankee Stadium.

The key has been consistent pitching and timely clutch hits.  Two things that were missing at times this season, often for long stretches.  But two weeks before the regular season came to a close, the Red Sox decided to go into “playoff mode” and they haven’t looked back.  It seems like they’ve had more big-time hits in the last couple weeks than they had all year up to that point.  Now they have an opportunity to clinch the best record in the AL and secure home field advantage throughout the postseason.

We knew all along that this team had the talent.  Baseball is a long, long season and we as Red Sox fans did A LOT of overreacting this year.  But could you blame us?  When your team underachieves and misses the playoffs five out of six years, it’s natural to lose hope early on if they spend the first three months of the year playing mediocre baseball.  This team had to prove to us that they were capable of reaching their potential on a consistent basis.  They’ve not only done that, but in just two weeks they’ve established themselves as a legitimate World Series contender.

Now we can enjoy David Ortiz’s last three games at Yankee Stadium knowing that we’re safely in the playoffs and Papi has a chance to grab a fourth ring on his way out the door.  It’s officially time to get fired up about baseball in Boston.  We missed you October.