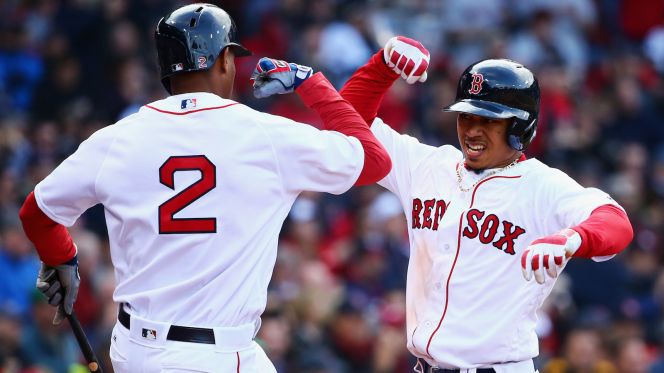 On Thursday, Major League Baseball announced the winners of the 2016 Silver Slugger Awards, recognizing the best hitters at each position from the American and National Leagues.

The Red Sox had the most winners of any team as Mookie Betts, Xander Bogaerts, and David Ortiz all came out on top in the AL for their respective positions.

This is a familiar feeling for Ortiz, who has now accumulated seven Silver Slugger Awards as a designated hitter in his 14 years in Boston.  After receiving the honor four seasons in a row from 2004-2007, and then again in 2011 and 2013, 40 year-old Papi managed to grab one more on his way out the door.

For Xander Bogaerts, who just turned 24 last month, this is his second consecutive Silver Slugger and the second of his three-year career as the Red Sox’ shortstop.

Mookie Betts, who turned 24 a week after Bogaerts, grabbed his first career Silver Slugger a couple days after winning his first career Gold Glove.  The Sox’ right fielder is hoping his luck continues when the AL MVP is announced on November 17th.  With a slash line of .318/.363/.534, 31 home runs, 113 RBI’s, and a Gold Glove performance in the outfield, Mookie is one of the three finalists along with Mike Trout and Jose Altuve.

These awards just further solidify how good the Red Sox’ offense was this year, which makes getting swept in the ALDS even more painful.  The difference with the Indians was that they had pitchers who stepped up in big games.  One of those pitchers was Corey Kluber, who is one of the three finalists for the AL Cy Young Award.  Rick Porcello is also one of the nominees, and luckily for him postseason performances won’t be taken into consideration when the winner is announced on November 16th.