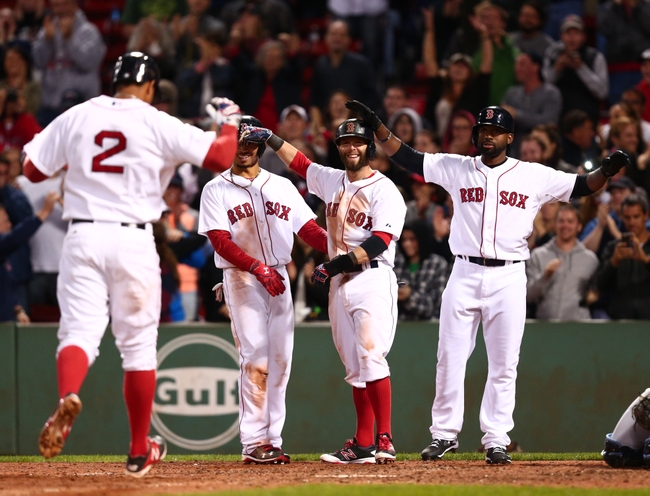 In 2014 and 2015, Brock Holt was the Red Sox’ best player.  He was their only All-Star last year, and although it was a great underdog story it showed just how weak the Sox’ lineup was.  If Brock Holt is the best player on your team, your team probably sucks.  And they did.

Now they don’t, and it’s because everyone is contributing.  And by everyone I mean there are seven players in the Red Sox lineup who are putting up All-Star numbers.  It’s absolutely unheard of and it’s a joy to watch.

This team has a chance to have one of the best offenses in Red Sox history if they can keep up this current pace.  As of right now the two best were 1950 and 2003.  In case you forgot about that ’03 team, Bill Mueller won the batting title while spending most of the year hitting in the eight or nine spot in the order.  We also got 37 home runs from Manny Ramirez, 31 from David Ortiz, 28 from Nomar Garciaparra, 28 from Trot Nixon, 25 from Jason Varitek, 25 from Kevin Millar, 19 from Bill Mueller, and 13 from Todd Walker.  Walker also added five playoff home runs and still holds the Red Sox record for the most homers in a single postseason.

Let’s break down the statistics of these guys to put in perspective just how dominant this offense has been:

Of these seven Red Sox hitters, three of them (Bogaerts, JBJ, Ortiz) are in the top four in batting average in the American League.  Only two of them are under .300 but they’re all in the top 26 in the AL.

Ortiz and JBJ are one and two in both slugging percentage and OPS.  All of the Red Sox’ Big Seven is in the top 36 in slugging and the top 30 in OPS

Three of them are in the top three in triples.

And last but not least, ALL SEVEN of these players are IN THE TOP 10 in hits, doubles, and home runs.  Yes, you read that correctly.

Here are the individual statistics for the seven Red Sox who are off to a hot start in 2016:

Bradley Jr. is second in the AL in average at .342, seventh in hits with 52, eighth in doubles with 10, first in triples with four, sixth in home runs with eight, and fourth in RBI’s with 33.  He’s also first in on-base percentage, second in slugging percentage, and second in OPS.

It’s hard to say that there’s anyone in the Red Sox’ lineup who’s hotter than JBJ right now.  That is until you realize that Xander Bogaerts actually has more hits (45) than Bradley Jr. has had (40) during his 27-game streak.

Mookie is 26th in the AL in average at .279, fourth in hits with 55, seventh in doubles with 11, second in triples with three, fifth in home runs with nine, and fourth in RBI’s with 33.  He’s also 45th in on-base percentage, 19th in slugging percentage, and 23rd in OPS.

Shaw has done more than enough to justify John Farrell’s decision to start him over Pablo Sandoval at the beginning of the year.  He’s 17th in the AL in average at .305, ninth in hits with 50, fourth in doubles with 15, third in triples with two, eighth in home runs with six, and eighth in RBI’s with 29.  He’s 14th in on-base percentage, 12th in slugging percentage, and 11th in OPS.

When Sandoval came to Spring Training out of shape and showed signs of another miserable year, we grouped Hanley Ramirez in there with him.  After Hanley’s disastrous 2015 in left field, there wasn’t much optimism in regards to his transition to first base.  Not only has he exceeded expectations in the field, but he’s hitting the way that we all knew he could when the Red Sox signed him in November of 2014.  This year he’s 11th in the AL in average at .315, seventh in hits with 52, ninth in doubles with nine, 10th in home runs with four, and 11th in RBI’s with 26.   He’s also 22nd in on-base percentage, 36th in slugging percentage, and 26th in OPS.

With all of the young guys having breakout years and Papi giving us a legendary farewell tour, Dustin Pedroia’s performance is going under the radar.  Pedey is 20th in the AL in average at .293, eighth in hits with 51, ninth in doubles with nine, eighth in home runs with six, 17th in RBI’s with 20, 26th in on-base percentage, 34th in slugging percentage, and 30th in OPS.

The Red Sox started the season 9-9 and had everyone in a panic.  Thanks to this explosive offense and some decent pitching, they turned things around and are 18-8 in their last 26 games.  Their 27-17 record is good for second best in the American League, just a half game behind the AL East leading Orioles.

All statistics via Baseball-Reference.com