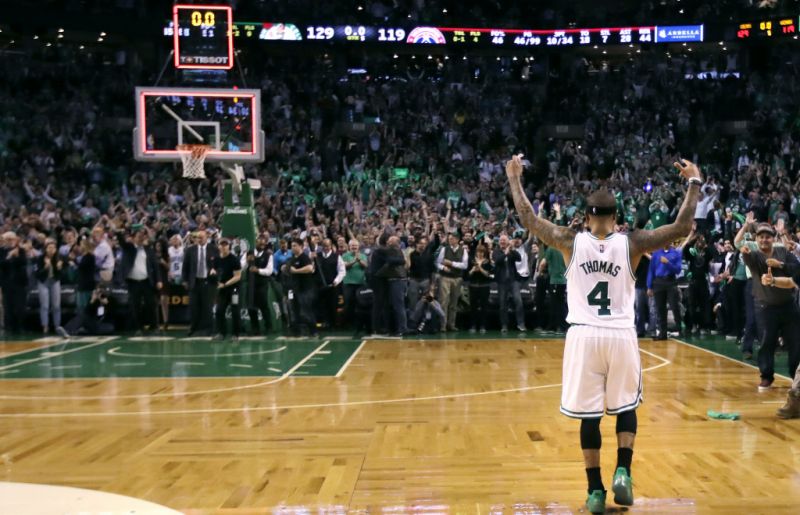 What made Isaiah Thomas’ Game 2 performance so impressive wasn’t just the point total, but everything that’s surrounding him right now.  Traveling back to Seattle to attend and give a speech at his sister’s funeral, going through hours of dental surgery, not sleeping.  There is nothing that can stop IT, especially if it’s a defender guarding him one-on-one.

Ever since that historic 53-point performance on Tuesday night, there’s been debate concerning where it ranks among the all-time great games in Celtics playoff history.  Naturally, I decided to compile a list.

Ray Allen dropped 51 points, but the Bulls won to force a game 7.

44 points, 10 assists, 8 rebounds.  The only reason it’s this low is because it came in a loss, which actually wouldn’t have been a loss if the refs didn’t screw us over but that’s another topic for another day.

The Celtics clinched the series in an 83-80 defensive battle.  KG led the way with 28 points, 14 rebounds, and 5 blocked shots after Hawks’ owner Michael Gearon Jr. gave him “a little extra gas” by calling him a dirty player.

The Celtics were down 3-1 to the Sixers before winning three games in a row, starting with game 5 led by Sam Jones’ 37 points.

The Truth scored 46 points to clinch the series win over Allen Iverson and the defending Eastern Conference Champion Sixers, leading the Celtics to the Conference Semifinals for the first time in 10 years.

Cooz went off in a four-overtime thriller to clinch a 2-0 series win.  Playing on an injured leg, he had 25 points at the end of regulation, 6 of the team’s 9 points in the first OT, all 4 of their points in the 2nd OT, 8 points in the third OT, and 9 of their 12 points in the fourth OT.  He finished with 50.  The Celtics went on to lose to the Knicks in the next round.

After reaching the Conference Finals for the first time in 14 years, the Celtics pulled off the greatest comeback in NBA Playoff history by overcoming a 21-point 4th quarter deficit to take a 2-1 lead in the series.  Pierce scored 19 of his 28 points in the 4th.  New Jersey eventually came back and took the series in 6 games.

Pierce and LeBron go back-and-forth.  LeBron finishes with 45, Pierce finishes with 41.  Celtics come out on top and head back to the Conference Finals for the first time in six years.

The C’s beat the Hawks in game 1 behind John Havlicek, the only Celtic who’s scored more points in a playoff game than Isaiah Thomas.  He dropped 54.  Boston went on to lose to the Knicks in the Conference Finals.

The famous Bird vs. Dominique battle.  Bird scored 20 in the 4th, Wilkins had 16.  Bird finished with 34 and the Celtics advanced to the Conference Finals.

The only games that deserve to go ahead of this one were in the NBA Finals, and that’s the only reason they were more significant.  Isaiah put himself in the conversation with legends, but he knows that only a championship will earn him that label.  To go out there and drop 53 with all of the emotions he’s feeling is hard to even fathom.  Legendary performance from the former last pick in the draft.

The Celtics took a 3-2 series lead thanks to Bird’s 34 points and 17 rebounds.  They went on win the title in 7 games.