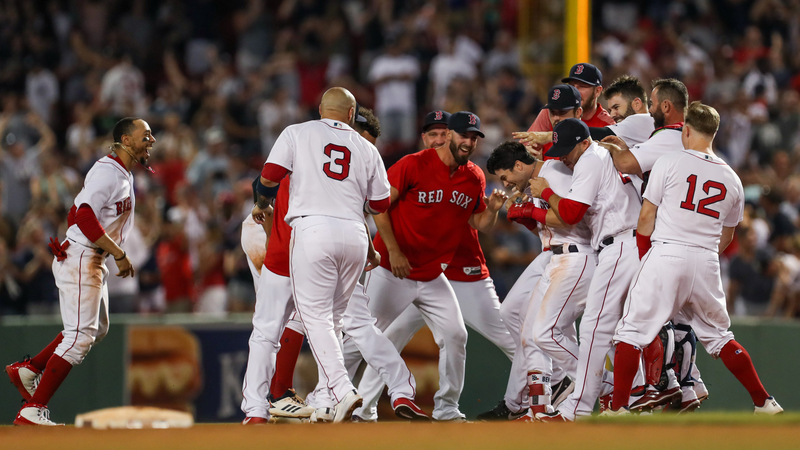 We all know what happened the last time David Price went up against the Yankees on Sunday Night Baseball.  It was arguably the worst start of his career and New York took the rubber match of the series to grab control of the AL East lead.

That was on July 1st.  Fast forward five weeks, and Price again faced the Yanks in a prime-time game on ESPN.  The only difference is that Boston was on the verge of a four-game sweep which would give them a 9.5-game stranglehold on the division.  Not to mention this one was at Fenway, so the amount of pressure on the notorious Fortnite fanatic wasn’t nearly the same.  Regardless, it was a good test for a guy who has been owned by the Yankees during his two and a half seasons in Boston.

And he was solid.  Not great, but solid.  He was good enough to keep the Red Sox in position to put together yet another comeback win and finish off the Yankees hopes of competing for the division title.  And that they did.

Price finished with two earned runs over six innings of work.  The Yankees put up four runs in the seventh to take a 4-1 lead.  The Sox couldn’t get anything done in the seventh and eighth, and went into the bottom of the ninth trailing 4-1 with Aroldis Chapman on the mound.  That’s when things got fun.

Holt struck out, Leon walked, Betts walked, Benintendi struck out, Pearce walked.  Two outs, bottom of the ninth, bases loaded, J.D. Martinez at the plate.  After striking out in his first three at-bats, J.D. came through with a two-run single to make it a one-run game.

The Yankees defense took care of the rest:

The game went into extras and Matt Barnes executed a 1-2-3 inning in the top of the 10th.  Jonathan Holder took the mound for the Yanks and was able to retire Nunez and Holt to set the stage for some two-out magic.

Leon singled, Betts was intentionally walked, newcomer Tony Renda pinch ran for Leon, and Benny Baseball came through with the walk off single up the middle:

This series very well could mark the demise of the 2018 New York Yankees.  Meanwhile, the Red Sox clearly have flair for the dramatic that has been missing since 2013.  Is it October yet?