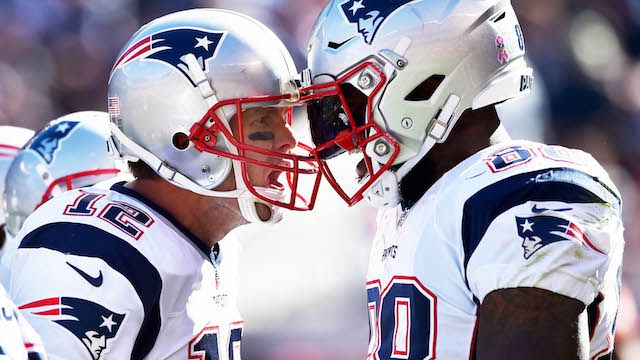 As many of us predicted, Tom Brady tore up the Cleveland Browns’ defense in his return to NFL action last Sunday.

And as many of us hoped, Brady’s return also marked the return of the Rob Gronkowski that we’ve all grown to know and love over the last five years.  With that comes the lethal tight end combo that we’ve all been waiting for with Gronk and Martellus Bennett.

Brady has been known to bring players on the back end of their careers to levels that were thought to be unreachable.  Just when you think a guy has hit his ceiling, he comes to New England and his career is not only revived, he’s better than he ever was before.

Martellus Bennett is just the latest example.  His best season before this year was 2014 when he racked up 916 yards and six touchdowns.  Through five weeks of the 2016 season, the 29 year-old is on pace for around 15 touchdowns and the first 1,000-yard season of his nine-year career, and most of that is due to his three-TD performance in his first regular season game with Brady.

Then there’s also Chris Hogan, who had the best game of his life in his first game ever with Brady in week five, finishing with a career-high 114 receiving yards.  The 27 year-old is now on pace to nearly double his previous high of 450 yards last season.

That’s the impact that Tom Brady has.  Bennett was able to be a Pro Bowl tight end with Jay Cutler throwing to him, which is pretty impressive.  Hogan put up decent numbers with EJ Manuel, Thad Lewis, Jeff Tuel, Kyle Orton, and Tyrod Taylor all throwing to him over the course of just three seasons, which is really impressive.  So when you team him up with the GOAT, it’s only natural that his numbers will skyrocket.  It’s common sense at this point.

We saw it with Randy Moss, who was arguably the greatest wide receiver of all-time with Dante Culpepper throwing to him.  In fact he was likely the reason that Culpepper was an Pro Bowl quarterback from 2000-2004.  When he teamed up with Brady in ’07 at age 30, he not only had the best year of his career, he broke Jerry Rice’s single season touchdown record.

I’m in no way comparing Martellus Bennett or Chris Hogan to Randy Moss.  Simply pointing out that there’s never been a quarterback who gets more out of their personnel than Tom Brady.  The man led the Pats to the AFC Championship in 2006 with Reche Caldwell as his number one target.  Caldwell was cut the next year and that was pretty much the end of his career.

And he isn’t the only one who put up solid numbers with Brady and then fell off the face of the earth once he departed New England.  Has anyone heard from Kenbrell Thompkins recently?

In Wes Welker’s first season in the NFL with the Miami Dolphins, he racked up 434 receiving yards.  In his second, he improved to 687.  Then he teamed up with Brady, and over six seasons he only finished with less than 1,000 yards once.  When Welker went to Denver, his role was filled by a former quarterback at Kent State by the name of Julian Edelman, who immediately developed chemistry with Brady and basically became the new Wes Welker.

The point is that any receiver who has played with Tom Brady has had the best year of their career during that time.  Of course there are exceptions like Chad Ochocinco or Joey Galloway, but we can already see that Bennett and Hogan won’t be going down that road.  Brady just found two new favorite targets, and they’re about to reap the benefits of playing with the greatest of all-time.