The Patriots beat the Broncos 16-3 Sunday afternoon in Denver to clinch the 14th AFC East title in Tom Brady and Bill Belichick’s 16 years together.  It was their eighth division title in a row, which set a new NFL record.

The Pats have now won five consecutive games as they improve to 12-2 on the season.  For their first three wins of the year, Brady was at home watching from his couch.  So when they won the division on Sunday, TB12 made sure to give credit to the other two quarterbacks who are also responsible for getting the team to this point: 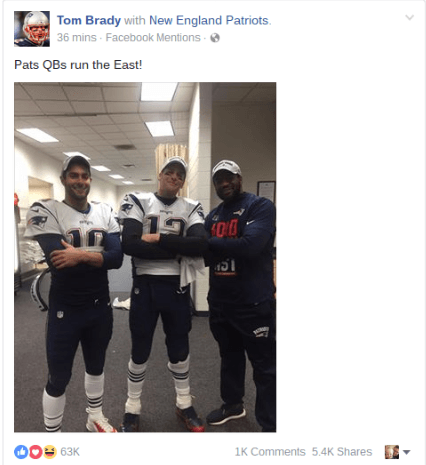 Jimmy Garoppolo and Jacoby Brissett may have played a small role in comparison to Brady this year, but every win counts.

The Pats will take on the Jets at Gillette at 1 pm on Christmas Eve before wrapping up the regular season against the Dolphins in Miami on New Year’s Day.  The goal now is home field advantage.