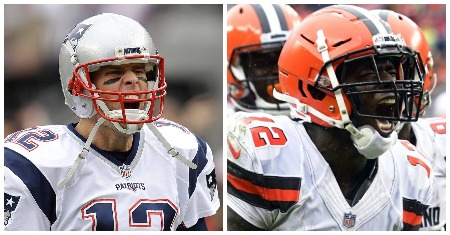 Josh Gordon has played in six games since December of 2014.  That’s six of a possible 51.  It was recently announced that the 2013 Pro Bowler was possibly going to be released by the Cleveland Browns after a six-year stint that didn’t quite pan out the way he or the organization had anticipated.

Despite being unreliable for the majority of his career, the Pats traded for Gordon on Monday in an effort to improve their lackluster receiving corps.

Great move.  There’s absolutely no risk involved with this deal.  New England gave up a fifth-round pick for a guy who has superstar ability.

Unfortunately, Gordon hasn’t displayed that ability through a full season since 2013 due to substance abuse issues that have resulted in suspensions as well as time in rehab.  But he has since been open about his internal struggles and his efforts to fix them.

He appears to have his head in the right place.  Browns’ reporter Mary Kay Cabot might say otherwise, but she’s been known to fabricate stories to gain clicks.  Her claim that he “wasn’t himself” at a recent photo shoot should be met with skepticism.

That’s not to say the man doesn’t have some serious problems that have prevented him from maintaining a spot among the best wide receivers in football.  Let’s hope that playing with the best coach and quarterback in NFL history will get him on the right track.  He’s only 27 and still has the physical attributes that made him so great five years ago.

Tom Brady was on WEEI on Monday night and gave his thoughts on the trade, saying he hopes that Gordon can adopt their team-first mentality:

“I am not making — I hate to make projections and expectations. That’s not fair and I have never met Josh personally, just like I hadn’t met some of the guys who have come in the last couple of weeks. We’ll see how it goes this week. Hopefully he can work hard, put the team first and end up helping us in any role he can find for himself on the team.”

If this goes well, we’re looking at a drastic improvement to the Patriots offense.  If it goes really well, we’ll be watching one of the most lethal quarterback-to-wide receiver combos in all of football.  It’s great to see Belichick taking a chance on a guy like that.