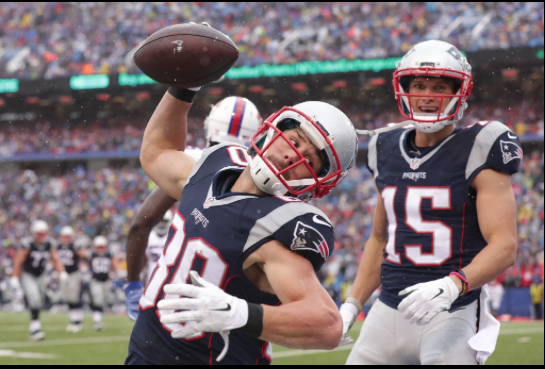 It’s just too easy. Too damn easy. The Patriots will go into their bye week with a 7-1 record which of course puts them top of the AFC East and will leave Roger Goodell in fear of what will happen over these next months.

In week 4, the Bills stunned the Patriots in their own backyard when they defeated them 16-0. However, the Patriots starting QB was their 3rd choice. And he had a broken hand. I’m not one for making excuses but that’s pretty damning right there. The difference between that match and today’s? Their daddy was back. The man who has single handedly crushed that team was back and there was almost zero chance that it was going to be another shutout.

Touchdown catches from both Danny Amendola & Chris Hogan (what a beauty) had given the Pats a relatively comfortable lead of 14-3 but a TD from Buffalo made it a 3-point game. Set up on their own 47, Tom Brady found Rob Gronkowski down the field and Gronk took it all the way home for his 69th career TD; a new Patriot record. I loved everything about this play. The way Gronk sets up and how he moves is just beautiful. He uses his powerful presence to command his way and then when he needs to, can use blistering pace to give the defence no chance. The Gronk is well on his way to becoming an all time great Patriot and maybe one day earn him a spot in the HoF.

After this, it was not really much of a contest and Buffalo’s chances of any type of comeback were growing slimmer by the minute. However, a few things today did stand out to me. One of them was when the Patriots had 12 men on the field, got called out on it, still had 12 men on the field and then at the last minute 2 players ran off? Belichick had to call a timeout there because it was all just too confusing. I don’t know if the Patriots were confused by a play call by Buffalo or they just simply forgot. Whatever it is, I think Matt Patricia needs to ensure this type of thing doesn’t happen again. Another thing that stood out was the Patriots inconsistency at second corner, something that they paid for twice. Eric Rowe started the day at corner and both times he was penalised for pass interference which then led to Buffalo scoring touchdowns on both calls. They replaced him with Coleman but he then gave away a penalty so the cornerback position is something New England will definitely have to improve on in these two weeks off.  It was also nice to see Trey Flowers record his first two sacks with the Patriots. The 2015 draft pick had a good day and after the game said the following: “It was a long time coming. Tasting the blood, it’s finally good to be able to eat.” Anyone else waiting for Goodell to get Flowers charged with Cannibalism?

To all those people saying Tom Brady could win MVP, it’s absolutely absurd and stupid to even suggest such a thing. No one in the Boston area (or anyone with a brain cell) believed that Brady ‘cheated’ but the fact of the matter is that he was found guilty and got given a four game suspension for ‘cheating’ and there is almost zero chance that the writers would vote for someone who missed the start of the year because of that.

I feel like we gotta talk about it. Yeah, you know what I mean. #DildoGate. In possibly the most Bills move in the history of Bills move, one angry and horny spectator threw a plastic penis on the field in what I presume was aimed for Chris Hogan. It tests the maturity of a nation when something a child would laugh at occurs and I gotta be honest. I laughed. I also loved how the referee got rid of it. He was probably thinking along the lines of ‘I don’t get paid enough to have my family watch me discard sex toys on television’

All in all, despite the defensive issues, this team is looking excellent and the two weeks off will do them nicely. Already won the AFC East and soon to have home-field advantage for the championship.