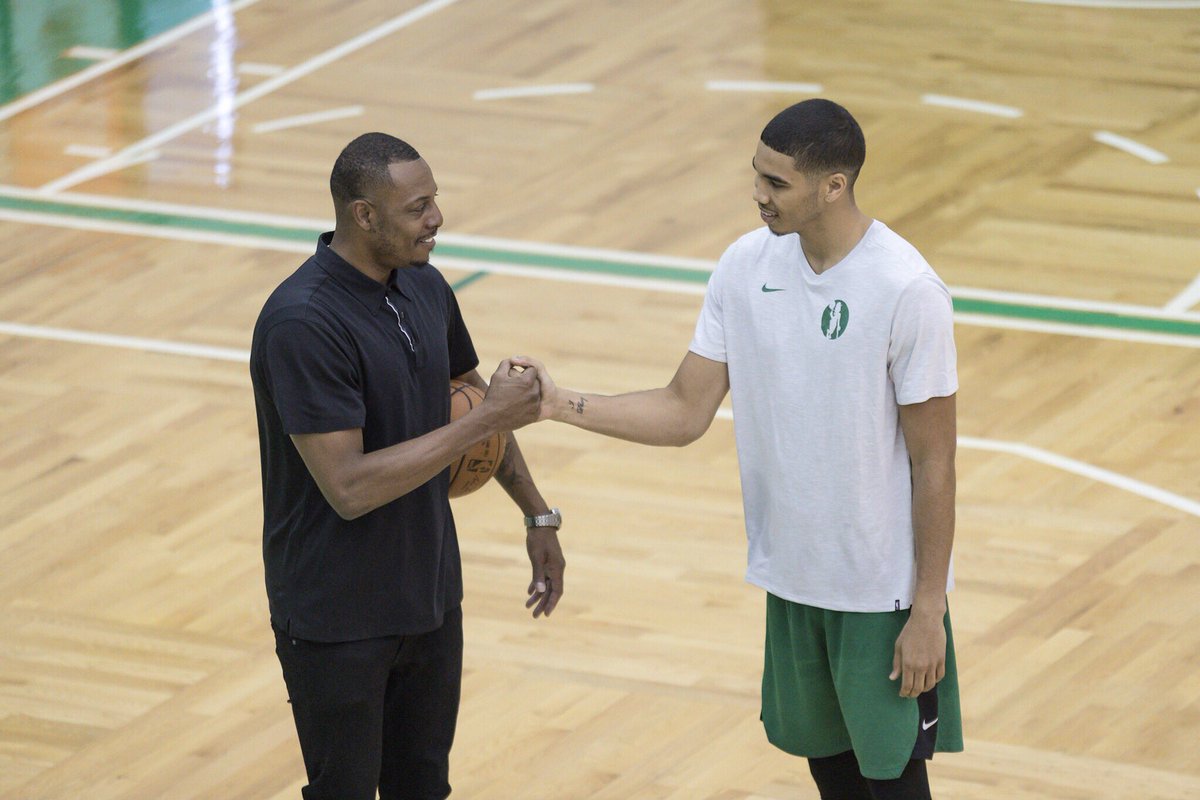 Speaking earlier this week to CSNNE’s A. Sherrod Blakely, former Celtics great Paul Pierce continued to heap praise on Boston’s third overall pick, Jayson Tatum.  Many have noted the similarities between Tatum’s game and Pierce’s, especially on the offensive side of the floor, and Pierce seems to be among them.  He first said of Tatum:

“He looks like an older version of me, when I started doing the step-back and stuff, when I’m watching him, he looks like a mature version of my game, like sixth, seventh, eighth year. He sees the defense. He knows what’s going to happen before it happens. He understands his position, footwork, his step-back is there. His offensive repertoire seems complete.”

Personally I think there’s a lot of truth to what Pierce is saying – Tatum has an extremely high upside on the offensive end and can become a very good defender.  The skills that he showcased in the summer league; the step backs off 1 foot, the penetration, the ball handling were phenomenal for a guy of his size.  However we all know the NBA is a far cry from the summer league and the playoffs, which the Celtics hope to venture deep into even more so.  Tatum was a match-up nightmare at 6’8 with handles and a J for every team he played against in college and summer league.  But NBA rosters, even in the comparably weak East, carry guys like Jae Crowder (Cleveland), Otto Porter Jr (Washington), Thaddeus Young (Indiana), and Jabari Parker (Milwaukee) who all match up decently size and athleticism-wise.

The next part of Pierce’s quote I think gets to the heart of just how successful Tatum will be in the NBA:

“The thing I see, what makes the guy special, there’s a lot of talent in the league. There’s no question about it, your mentality, your drive, how great you want to be, that’s what separates the good from the great ones. You look at guys from the past, like Kobe’s determination, his competitive spirit. You see guys that were just as talented, they didn’t have the same competitive spirit so they could not reach the levels of other greats.”

This also seems to bode well for Tatum as all indications so far are that he’s a humble hard worker who’s eager to learn.  When asked recently about whether the Celtics now have what it takes to win with the Kyrie Irving addition, he raved of the possibilities but acknowledged that as a rookie he didn’t really know what it takes to make an elite NBA team yet.  Hopefully the raw talent plus self awareness we’ve seen so far will lead to a long and successful Celtics career.

So just how true is Pierce’s statement?  I think the 6, 7, 8 years in analogy is pretty extreme, but is 19 year-old Jayson Tatum better than 19 year-old Paul Pierce?  Probably yes.  But Pierce came to the Celtics as a 21 year-old centerpiece of a struggling team.  Tatum joins a talented, reloaded roster on a team that went to the Eastern Conference Finals last year.  As a result, his opportunities and therefore development might come along a bit slower than Pierce’s did.  In this moment I think Tatum is better than Pierce was as a 19 year-old, but just a notch below the Paul Pierce that joined the Celtics in 1998.  In 4-5 seasons, Jayson Tatum can be a problem in this league and I hope to see him in green for a long time.