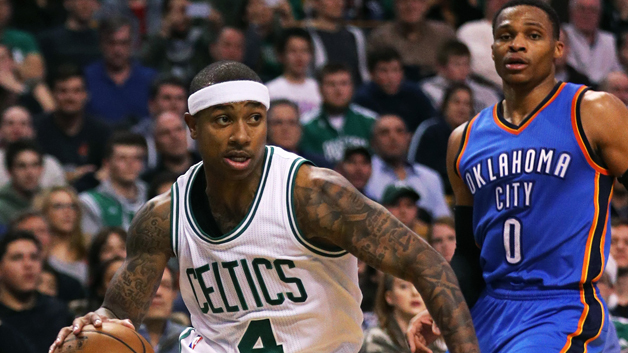 A month ago, the Celtics were barely above .500 despite Isaiah Thomas putting together an All-Star caliber season.

One month later, Isaiah has boosted his level of play from All-Star to MVP candidate.  The result is that the Celtics have won 10 of their last 12 games and are currently fighting the Toronto Raptors for the two-seed in the East.

At the start of December, Isaiah’s name was nowhere to be found on the list of players with the best odds to win the MVP.  Russell Westbrook was rightfully being discussed as the front-runner, and he continues to battle James Harden for that top spot.  But while guys like Anthony Davis, DeMarcus Cousins, Damian Lillard, and DeMar Derozan have faded out of the race over the last month, Thomas joins Kevin Durant, Giannis Antetokounmpo, and Jimmy Butler as one of the players who has taken a step forward and established himself as a legitimate contender for basketball’s most prestigious individual award.

Last Friday, NBA.com released the most recent version of their “Race To The MVP” Ladder, giving Isaiah the seventh best chance to win the award and the fourth best chance in the East:

Realistically, Isaiah Thomas will not be the NBA MVP.  But that hasn’t stopped Celtics fans from showering him with MVP chants at the free-throw line down the stretch of close games.  The fact that he’s in the conversation is enough reason to celebrate for those of us who have the privilege of watching him on a consistent basis.  At 5’9″, he’s already arguably the best basketball player in history under six feet, assuming Allen Iverson wasn’t any shorter than his listed height.

IT is currently the leading scorer in the East with 28 points per game.  He’s the fifth best scorer in the NBA, but his field goal percentage is higher than three of the four guys ahead of him.  He’s also the best fourth quarter scorer in the league who isn’t named Russell Westbrook.

Only Anthony Davis is averaging more points than Thomas with a higher percentage, but Davis is behind Thomas in the MVP race due to the struggles of his team.  While the Celtics climb towards the top of the East, the Pelicans have stumbled to 15-24 and find themselves 10th in the West.  With a talent like Davis on his roster, it’s no surprise that Alvin Gentry has the best odds to be the first head coach to get fired this season.

After winning the Eastern Conference Player of the Week for December 19th through December 25th, Isaiah topped his accomplishment with the best game of his life the next week.  In a win over the Miami Heat on December 30th, he dropped a career-high 52 points, the most by a Celtic since Larry Bird in 1985.  His 29 in the fourth quarter was the most in a quarter by any player in Celtics history.  Many, including myself, would argue that Isaiah should have won the Eastern Conference Player of the Month for December over John Wall.

Like I said, Isaiah won’t win the MVP.  But if he can keep up this current pace and the Celtics can keep winning, it’s likely that he’ll crack the top five and maybe even the top four.  As I said after he dropped 52, that’s not bad for the shortest player in the NBA and the former last pick of the draft.