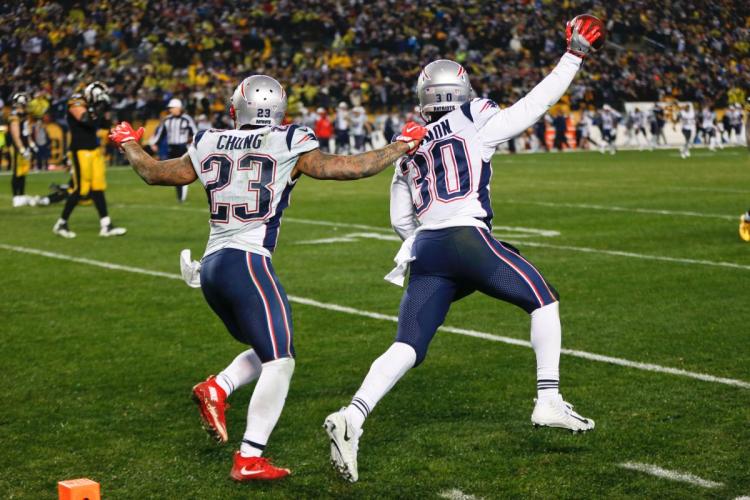 Sunday’s win for the Patriots in Pittsburgh is already being dubbed an instant classic, and for good reason.  It’s hard to remember a regular season game during the historic Brady/Belichick era that had so much on the line and somehow managed to exceed the hype.

Week 14.  The two best teams in the AFC battling for conference supremacy just three weeks before the postseason begins.  It was considered to be the game of the year before it even took place, and it will hold that title after week 16 wraps up two weeks from now.

The crucial overturned touchdown for the Steelers.  Duron Harmon’s game-winning goal-line interception.  This one had everything.

So that got me thinking.  Where does this game rank among the Patriots’ best regular season wins during their now 17-year dynasty that began back in 2001?  Here’s what I came up with:

The Patriots lost fumbles on their first three possessions and fell behind 24-0 to Peyton Manning and the Broncos.  Then the Pats responded with 31 unanswered points.  Manning led a tying TD drive, but after a botched punt return in overtime, Stephen Gostkowski hit a 31-yard field goal to win it.

Bethel Johnson took a kick 92 yards for a touchdown before halftime, and Willie McGinnest stuffed Edgerin James at the goal-line as time expired.

Instantly lands in the Top 3.

Unicorns, show ponies, where’s the beef?  We’ll never forget the Kenbrell Thompkins catch.  Would be higher if it was a more pivotal game later in the season.

The Dolphins missed a field goal late in regulation, the Patriots picked off Jay Fiedler in overtime, and Tom Brady connected with Troy Brown for an 82-yard game-winning touchdown.

Belichick shows his evil genius when his decision to intentionally take a safety pays off.

The biggest “statement win” of the Brady/Belichick era.  The Pats were destroyed 41-14 by the Chiefs at Arrowhead in week 4.  People were calling for Brady’s job, Trent Dilfer said the Pariots were “not good anymore.”  All Bill Belichick said was “we’re on to Cincinnati”, and indeed they were.