While we wait for the NBA Finals to begin, let’s look back at last week’s Western Conference Finals where Dwight Howard made the most Dwight Howard-like statement that you will ever hear.  A statement that completely epitomizes him as a basketball player, a teammate, and just a person in general.  A statement that perfectly summarizes his NBA career.  A career that has been highlighted by two things: his ability to put up monster numbers and his inability to win a championship.  Now I’ve always placed Dwight Howard at the top of my list of players with superstar talent that will never win a ring (followed by Carmel0) and comments like his most recent ones are part of the reason why.

Following the Rockets’ Western Conference Finals game 5 loss last Wednesday, Howard was asked in his post game press conference about how tough it was for the season to end the way it did.  He said the following:

“It’s tough, but I won’t stop fighting.  I’m going to continue to push myself to the limit and remember that, no matter how the season ends, I’m still a champion. And I won’t let anyone tell me anything different.”

If there was any doubt before that this guy is going to finish his career without a ring, there shouldn’t be now.  No player who is considered an all-time great has ever made such a delusional comment.  As a matter of fact I don’t know if any player in sports history has ever felt as undeservedly entitled as Dwight Howard.  No athlete who has dedicated their life to winning a championship professionally in their sport would ever declare that they are a champion unless they’ve earned that title.  Dwight is just wired differently and that will never change.

It’s no wonder KG has always hated him.  Kevin Garnett probably wouldn’t have even called himself a Hall of Famer before he won a ring even though he already was at that point.  He knew that until he won a championship, everything he had accomplished was meaningless.  It makes sense that he’s always getting into it with Howard on the court.  Like the time during their days with the Celtics and Magic when Garnett would constantly taunt Dwight by saying “Paint your face clown!”, which is still one of the funniest documented insults in the history of NBA trash talk.  But it’s also true.  Dwight Howard is a clown.  He’s constantly laughing and joking around when he’s out on the floor.  He never looks serious or gets angry until someone like KG smacks him around a little and lets him know that he’s not at the circus.  There was also that time during All-Star Weekend a few years ago when Garnett refused to do a photo shoot with Howard, or that time when Garnett earned a techical for punching Howard’s forearm when he wouldn’t let go of his jersey.  Most notable was their altercation earlier this season which I’m sure everyone remembers:

But no matter how many times KG tries to put him in his place, Dwight Howard will continue to lack the heart and desire that is necessary to win a championship.  In his eleven years in the league he has proven over and over again that he only has one positive attribute that makes him a good player.  Physical strength.  The guy is a monster.  He has the widest shoulders in the history of the NBA and there is simply no center in the league who can out-battle him on the boards.  He also has an incredibly high field goal percentage (59% this past year) due to the fact that most of his shots come from within five feet.  Here is his shot chart from this year: 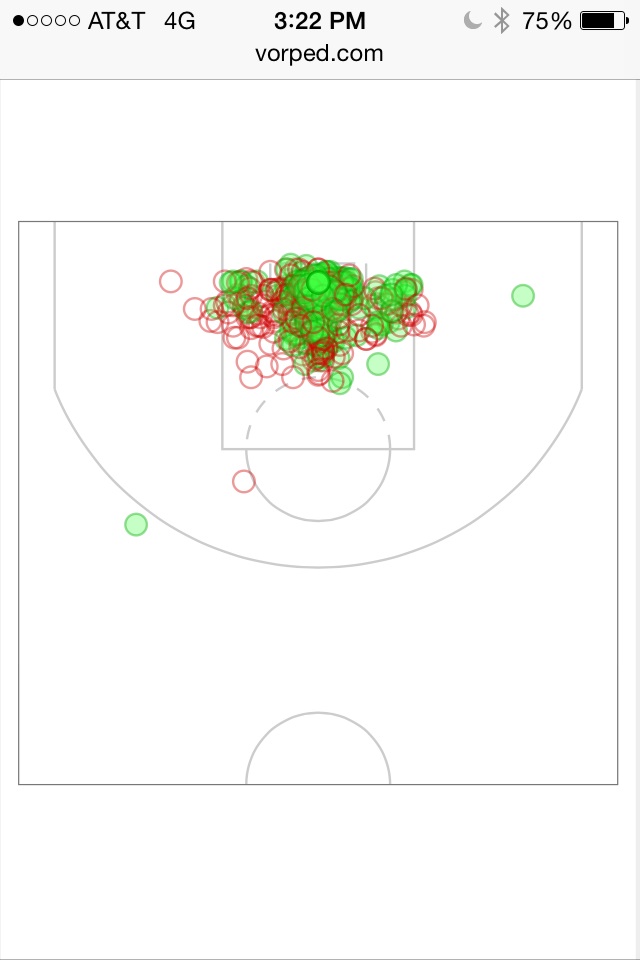 The problem is what he doesn’t have: heart, desire, leadership skills, the ability to shoot free throws or any shot outside of five feet, or the ability to get along with coaches and teammates.  All of this equals zero championship rings and just one Finals appearance in 2009 when he was able to take advantage of a banged up, KG-less Celtics squad in the Conference Finals.  The Magic were then dismantled by the Lakers 4-1.  When Garnett returned to action the following season the Celtics got their revenge by breezing past the Orlando in the playoffs.

Dwight somehow managed to screw up what was supposed to be a championship team in LA when he joined forces with Steve Nash, Kobe Bryant, Pau Gasol, and Metta World Peace.  They came into the season as favorites to win it all and ended up getting swept in the first round of the playoffs.  Many blame their struggles on Dwight’s sour relationship with Kobe, as Kobe often questioned his toughness and effort.  Since Howard’s departure from the Lakers, Kobe has made it clear that they aren’t exactly best friends.   Earlier this season he was heard calling Dwight some not so nice things:

Basically every respected NBA player and numerous analysts and former coaches have disrespected Dwight and called his toughness into question, but no matter how many times someone tries to light a fire under him, he’ll never be as motivated as he needs to be to become a legend.  If you already think you’re a champion, then what do you have to fight for?

2 thoughts on “Why Dwight Howard Will Never Be A Champion”