A lot can change in a week during the NBA playoffs.

Last Monday we were getting ready for a thrilling Game 7 at the Garden against the Wizards.  The next day, we celebrated the Celtics landing the number one pick in the NBA Draft Lottery.

All was right in Celtics Nation.  The top pick and a trip back to the Eastern Conference Finals in a span of 48 hours.

Then Wednesday happened.  The C’s were blown out on their home court by the Cavs for the majority of Game 1 before cutting the final deficit down to a somewhat-respectable 13 points.

Friday was one of the most humiliating losses that Celtics fans will ever experience in their lifetimes.  A 44-point thrashing.  The worst home playoff loss in Celtics history.

As if that wasn’t bad enough, Isaiah Thomas left the game with a hip injury and was later ruled out for the remainder of the postseason.  Heading to Cleveland down 2-0 without your best player after getting embarrassed on your home court is enough reason for a lot of teams to mentally check out.

Instead, the Celtics pulled off the largest NBA playoff upset in 20 years and one of the best 2nd half comebacks in playoff history. 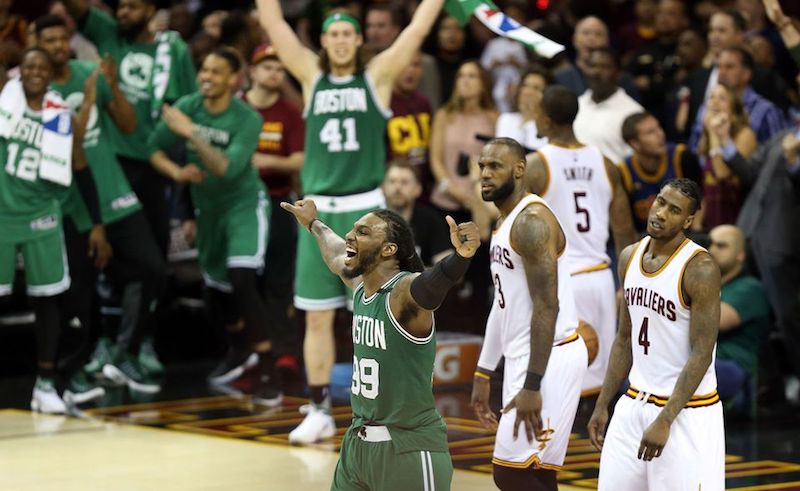 Let’s address the people who are saying the Celtics are a better team without Isaiah Thomas.

These guys have had success without Isaiah in the past.  Unfortunately it’s only in short spurts.

They’re a different team.  They move the ball more and they count on different guys to step up and carry the scoring load.  The issue is that without IT, they don’t really know where that scoring is going to come from and sometimes it might not come at all.  You can’t go into every game not knowing who’s going to make shots.  In the NBA, there has to be one guy who leads your team in scoring most nights.

Fortunately for the Celtics in Game 3, they had two guys fill that role:

Avery Bradley was probably the player most people expected to be the primary scorer in Isaiah’s absence.  AB had 20 points including his ridiculous game-winning three, which eventually found the net after the kind roll:

Bradley was also his usual scrappy self on defense, coming away with 2 steals and showing some edginess in this brief scuffle with Kyrie Irving:

Avery was good, but the team-high for points went to Marcus Smart with 27.  This is what I mean when I say that you really don’t know where the scoring will come from when your best player is out.  Smart was the worst three-point shooter on the Celtics’ roster during the regular season (28%), but on Sunday they relied on him going 7-for-10 from beyond the arch.  That’s not something you’ll see too often, but to his credit it came at the right time.

Like Bradley, Smart was the defensive menace that we’ve always known him to be with 2 steals and a blocked shot.  But his 27 points and 7 assists were good for the best offensive output of his three-year NBA career.

So yes, Game 3 was technically a fluke.  Certain guys played way beyond their potential and LeBron James completely disappeared (11 points, 0 in the 4th).  But flukes do happen, so let’s hope for another one on Tuesday.