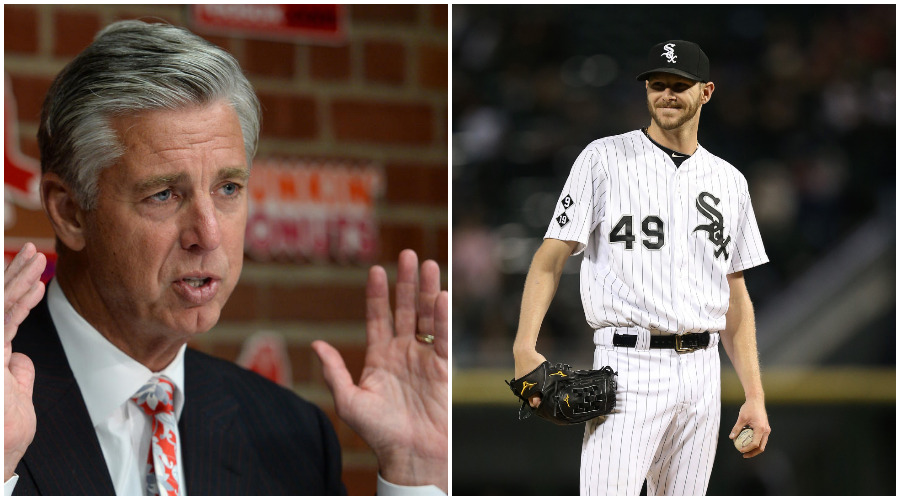 It was announced Tuesday that the Red Sox have traded for lefty ace and former Cy Young candidate Chris Sale from the Chicago White Sox in a package deal that included big-name prospects Yoan Moncada and Michael Kopech.

Besides the fact that he’s a great pitcher, one thing we all know about Chris Sale is that he’s a little bit of a psycho.  Cutting up your team’s throwback jerseys when no one is around in the clubhouse because you don’t like them is strange, there’s no way around that fact.  As sane, responsible, reasonable adults, there are better ways to handle situations than destroying someone else’s property.

At the same time, that craziness (if controlled a little better) could be exactly what the Red Sox needed in their starting pitching rotation.  Rick Porcello was great last year during the regular season, but he’s not exactly the intimidating force that you need to lead your staff, which we saw in the playoffs.  We all know by now that David Price isn’t the alpha-male that this team needs either.  Chris Sale is even crazier on the mound than he is off it, and that’s part of what makes him great and allows him to strike fear in his opponents.

As for giving up Moncada and Kopech, I say who the hell cares?  I find it hard to understand why anyone would be upset about giving up prospects when our entire Major League roster is already filled with young talent.  If the Sox want to win now, then some of the talent that they currently have in the minors has to be traded away so they can address their needs at the big league level.  After the 2016 postseason, it appears that one of those needs is still a dominant starter who has the balls to be an ace and step up in important games.  We should be ecstatic that the Sox didn’t have to give up anyone on their Major League roster to get that.

Last year at this time, we were thinking David Price would be the ace.  We were wrong.  David Price has shown us, not just last year but throughout his entire career, that he isn’t fit to be a number one starter.  For four of Price’s five and a half seasons as a starting pitcher for the Tampa Bay Rays, he had James Shields right next to him to help lead the staff.  Price led the team in wins for two of those seasons while Shields led for the other two.

When Price joined the Detroit Tigers in 2014, he was joining a team that already had three 15-game winners in Max Scherzer, Justin Verlander, and Rick Porcello.  Two of them (Scherzer & Verlander) already had Cy Young awards under their belts and Pretty Ricky was developing into an eventual Cy winner.

Then, halfway through the 2015 season, Price was dealt to the Toronto Blue Jays.  He joined a staff that included 2012 NL Cy Young winner R.A. Dickey as well as five-time All-Star and former World Series champion Mark Buehrle, who was in his 15th consecutive year of reaching double-digit wins.  During Buehrle’s stint with the Blue Jays, he had begun to return back to his superstar form that we saw in his 12 seasons with the White Sox, where he pitched a no-hitter in 2007 and a perfect game in 2009.  In 2015, Buehrle went 15-8 with a 3.81 ERA.  Dickey was also solid, racking up 11 wins and posting a 3.91 ERA.  Then there was Marco Estrada who was 13-8 and led the Jays with a 3.13 ERA and Drew Hutchison, the number five starter once Price arrived, also had 13 wins.

The bottom line is that Price has always been surrounded by great pitching staffs, and he was never trusted to carry a team the way he was with the Red Sox in 2016.  After a down year in 2015, no one was expecting Rick Porcello to be in the Cy Young conversation, let alone win it.  The fans, along with everyone within the organization, were looking for David Price to be an ace on an otherwise mediocre pitching staff, and that’s just not something he’s comfortable with.

Now, with the addition of Sale, the weight has been lifted not only off the shoulders of David Price, but of Porcello as well.  Porcello is another guy who is a great pitcher when he’s not being looked at as the number one guy.  With all the hype surrounding Price heading into 2016, he was able to fly under the radar and have the best season of his life on his way to winning the AL Cy Young.  Then, when he was counted on to start game one of the playoffs, he imploded and gave up five earned runs in four and a third.

Chris Sale is a guy who isn’t afraid of the moment.  Having him come in and hopefully take command of the pitching staff will allow for the pieces to fall in place a little more naturally in 2017.  Not to mention he’s currently on one of the biggest bargain contracts in sports at five years/$32 million.  He’s automatically the best pitcher on the staff, yet he makes less than Price, Porcello, and Clay Buchholz.  Oh, and he’s only 27 years old.  If you don’t think this deal was a no-brainer for Dave Dombrowski and the Red Sox, then I’m not really sure what you’re looking for.

The trade for Sale went down just a couple hours after the Sox strengthened their bullpen by sending Travis Shaw and a couple prospects to the Milwaukee Brewers for 28 year-old setup man Tyler Thornburg, who posted a 2.15 ERA in 67 appearances last season.  Even with David Ortiz retiring, Boston has the best young offense in baseball was well as three pitchers capable of winning a Cy Young and an improved bullpen.  To their credit, Dave Dombrowski and everyone else in charge is doing all they can to make sure Soxtober is a lot longer next year.