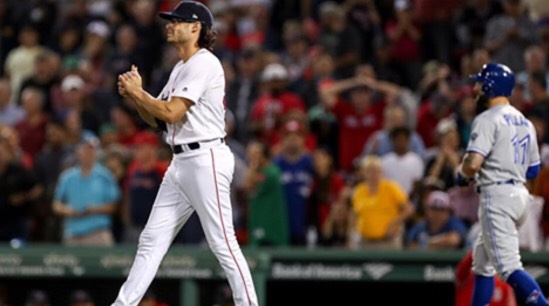 There have been times this season when the complaints about the Red Sox’ bullpen have been unwarranted.  A team with 101 wins certainly doesn’t deserve constant criticism in any facet of the game.

The closer we get to October, however, the questions about the reliability of Boston’s middle relievers are becoming more and more justified.

They’re on a retched pace right now.  Their historic offense has bailed them out more often than not, but that type of winning isn’t sustainable in the postseason.  Everyone knows this, which is why there’s a somewhat uneasy feeling among Sox fans right now despite the best regular season that most of us have seen in our entire lives.

This is starting to feel like a routine.  The offense gets the team out to an early lead, the bullpen blows it, and the offense puts together yet another miraculous comeback.  Joe Kelly has been shaky all year and he had another atrocious outing on Thursday.  He entered the game with a one-run lead, the bases empty, and two outs.  He walked the first batter, allowed a single to the second, hit the third, and hit the fourth to force in a run and tie things up at 3-3.  That’s an absurd amount of damage in only 15 pitches.  The potential for that type of meltdown in October is terrifying.

As he’s done all year, Alex Cora didn’t shy away from the issue:

“I mean, (Kelly) didn’t execute tonight. He’s been good lately, but today he wasn’t,” Cora said. “You know, he needs to get better, he needs to get better and he knows it. Today wasn’t a great night for him, but we trust the guy. It’s two outs in the eighth, we expect him to go out there and get the out. But he didn’t do it today, but if we have a situation tomorrow where we can bring him in, kind of like the same scenario, we’ll bring him in.”

It sounds like Kelly will be continuously thrown into the fire over these next couple weeks to give him a chance to prove that he’s even worthy of a postseason roster spot.

Brandon Workman came in and mopped up nicely, allowing the Sox to rally and finish off the sweep of the Blue Jays.  Workman has a solid playoff resume from 2013 and he’s been the one bright spot out of the pen.

Drew Pomeranz is out of the question.  Kelly, Heath Hembree, and Ryan Braiser have all struggled in the last couple weeks with Matt Barnes sidelined due to hip inflammation.  And even when Barnes is healthy, he has his own flashes of ineptitude.  Steven Wright can help, but relying on a knuckleballer in October is a slippery slope.

I’m not saying the Red Sox will get bounced in the first round and I’m also not saying they won’t make the World Series.  But if they do disappoint us, it will undoubtedly be a result of the bullpen imploding and Dave Dombrowski will be in hot water.