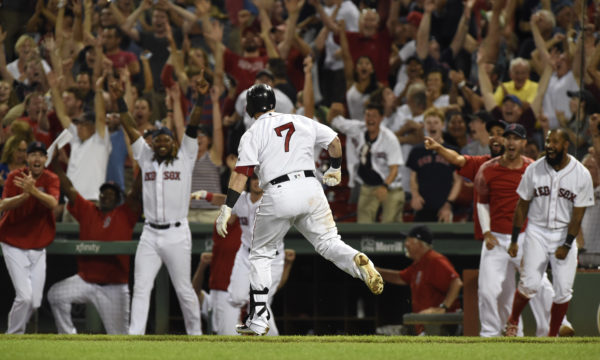 Aside from July 24th, 2004 when Varitek shoved his mit in A-Rod’s face and Bill Mueller walked off against Mariano Rivera, you’d be hard-pressed to find a more thrilling, unpredictable, emotionally draining regular season win than the one that took place at Fenway on Tuesday night.

Red Sox fans know they’re in for a treat when Chris Sale takes the mound.  That didn’t change on Tuesday, although things didn’t exactly go the way we all expected.  The best pitcher in baseball this year had by far the worst outing of his four-month Red Sox career and Boston found themselves in a 5-0 hole after the top of the 2nd.

Time and time again this season, Chris Sale has picked up the Red Sox’ offense by allowing them to win when they only score 2 or 3 runs.  It was only right that his teammates returned the favor on the one night where he happened to struggle.

So they did just that, tying the game up in the bottom of the second thanks to a three-run homer from Mitch Moreland, an RBI infield single from Brock Holt, and an RBI double from the red-hot Eduardo Nunez.

The game remained tied until the fifth when Edwin Encarnacion took Sale deep for a two-run shot.  The Sox’ ace had allowed 7 earned runs on the night and was pulled after the inning.

Down 7-5, the Sox were still in the game after Sale’s departure.  They would pick up their pitcher again, but had to wait until the 6th to do so thanks to Austin Jackson.  With no outs in the 5th, Hanley Ramirez went opposite field for what would have been home run if Jackson didn’t make one of the greatest catches in baseball history:

Luckily the Sox continued to put together some good swings the next inning.  An RBI single by Mookie Betts and a three-run double by none other than Eduardo Nunez (love this guy) off Andrew Miller had Fenway absolutely rocking:

Up 9-7, it was time for newcomer Addison Reed to contribute to the emotional roller coaster that this game had become.  Boston’s latest acquisition made his debut appearance in the 8th and surrendered a solo homer to Carlos Santana, bringing Cleveland back to within one.

For the third separate time in one game, the Sox relied on their offense to dig them out of a hole.  With all the crazy shit that happened in the first 8 and a half innings, the bottom of the 9th still managed to steal the night.

Jackie Bradley Jr. struck out to start the inning followed by a single from 20 year-old Rafael Devers, who continued his hot start with a 2-for-4 showing.

Xander Bogaerts then flied out to center field, bringing the Red Sox within one out of a crushing loss and thus setting the stage for one of the more wild finishes to a baseball game that you’ll ever see.

Mitch Moreland came up with two outs and struck out swinging.  That should have been the end of the game, but the ball got away from Indians’ catcher Yan Gomes and rolled all the way to the backstop.  Moreland hustled down the line and reached first base, keeping the rally alive in the most bizarre way imaginable.

At this point you could feel something special happening.  It was only right that Christian Vazquez came up next and sent everyone home happy with this unforgettable bomb to center field:

The icing on the cake was that this game put the Sox back in first place in the AL East.  But what made the win so satisfying was the clutch hitting.  These are the types of games we saw in 2013.  Even your best pitchers won’t be on their A-game every single night.  To be a good team, you have to respond well to adversity.  This team showed championship-level fight on Tuesday, and there’s a good chance this could be the win that sparks a big winning streak after going .500 in July.