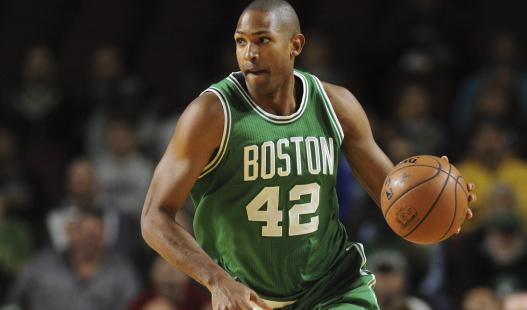 The Celtics took a big step forward this off-season when they signed Al Horford to a four-year, $113 million contract.  The four-time All-Star big man is expected to fill some holes in a Celtics front court that has been lacking the last couple years.

So far in the preseason, Horford has been everything we hoped for.  In his first two games he’s played a total of 36 minutes, contributing 21 points and 16 rebounds.  He’s been a +42.

The C’s didn’t waste any time getting Horford involved in their offense.  In their very first possession of their first preseason game against the Sixers at UMass Amherst, they ran a pick and pop to perfection as Avery Bradley found Horford for an open free-throw line jumper:

In the second game, against the Hornets in Greensboro, NC, Horford showed why he’s miles ahead of any big the Celtics have had in recent years.  Not only from a skill-level standpoint, but also his grasp of fundamentals, his instincts, and his basketball IQ.

Here’s a smooth reverse layup off of a nice touch pass from Isaiah Thomas.  Nothing Jared Sullinger ever did looked this elegant:

And here he is grabbing a rebound and immediately pushing the ball up the floor, finding AB for an easy fast-break layup:

Al Horford is SO good. pic.twitter.com/SZiPiSs0q9

The highlight of Horford’s preseason so far was this and-one dunk off an inbound pass from Jae Crowder.  He caught his defender napping, left him in the dust, and then made him pay with the powerful slam:

The Celtics lost the game against the Sixers and won against the Hornets, not that the results of preseason games matter all that much.  The good thing is that the key players look solid so far and Al Horford looks as good as advertised.

The C’s will take on Charlotte again on Sunday afternoon at 3:30.  This time at Mohegan Sun Arena in Connecticut.