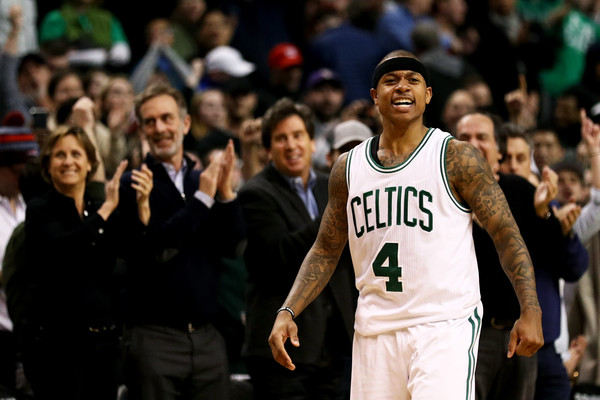 After getting snubbed in December when John Wall won the award, Isaiah Thomas finally took home an Eastern Conference Player of the Month.

It was announced Thursday that IT has been selected as the recipient for January.  He’s the first Celtic to win it since Paul Pierce in March of 2012, and joins Pierce, Larry Bird, and Antoine Walker as the fourth Celtic to ever win it.

The 5’9″ guard led the Celtics to a 10-4 record during the month, averaging 32.9 points and 6.9 assists per game.  He’s shown steady growth throughout the season, which correlates with the C’s improved play over the last couple months.

In the Celtics’ three games in October to start the season, Isaiah averaged 24.7 points per game.  In November, his averaged increased to 26.3.

In the months of December and January, IT stepped up his level of play from All-Star to MVP candidate, dropping in 30.2 points per game in December and 32.9 in January.  As a result, the Celtics have gone from one game over .500 on December 16th to 13 games over .500 and a stranglehold on the two seed in the East just a month and a half later.

That improvement has everything to do with Isaiah Thomas taking over games in the fourth quarter.  The 27 year-old is averaging over 10 points per game in the fourth, and is on pace to have the highest points in a quarter average in 21 years.

And after earning the Player of the Month award for January, Isaiah isn’t slowing down a bit.  In his first game in February, he came out and scored 44 points including 19 in the fourth (typical) to lead the Celtics to a comeback over the Raptors, a team that they’ve had problems with this year.  Thomas now has five 40-point games this season, the most by a Celtic since Pierce in 2002-03.

He’ll look to lead the Celtics to their sixth straight win and 19th in their last 25 on Friday night when they welcome the Lakers to TD Garden.