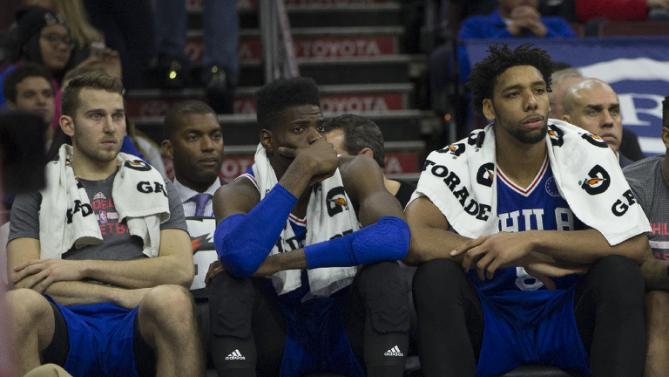 Rebuilding in the NBA can be an ugly, gruesome process.  Teams endure historically bad seasons in hopes that ping pong balls will bounce their way or a big-name free agent or favorable trade offer will land in their lap.  They tell the fans to trust the process as they watch their team attempt to set the franchise record for consecutive losses.

For many of these teams, these bad seasons add up and all-time losing streaks become all-time playoff droughts.  Teams like the Sacramento Kings, who haven’t made the playoffs in 11 years.  Or the Minnesota Timberwolves, who haven’t made it in 13.  Of course those are the most extreme cases, but there are a handful of teams who are currently struggling to climb back into relevance.

Even the Cavaliers were garbage after LeBron left and remained garbage until he came back, never finishing less than 16 games under .500 in the four years that he was gone. 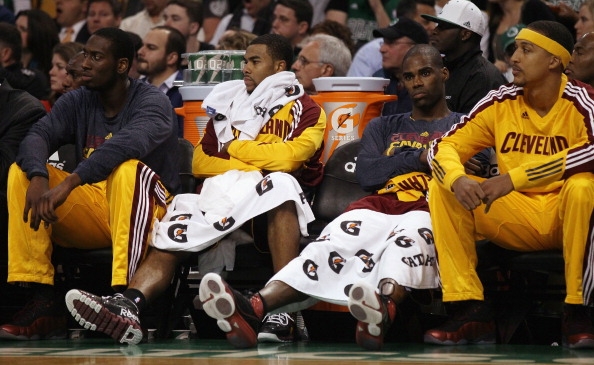 So you get the point.  When teams hit rock bottom in the NBA, they have a hard time bouncing back in a timely manner.  Sometimes it gets so bad that you wonder if management has any idea what they’re doing.  Oftentimes they don’t.

Then you have Danny Ainge and the Boston Celtics.

Four years ago, the Celtics finished 41-40 and were bounced in the first round of the playoffs by the New York Knicks.  Two months later, Doc Rivers agreed to a deal with the Los Angeles Clippers, ending his nine-year tenure as Boston’s head coach.

This marked the beginning of the Celtics’ rebuild after a six-year run of chasing titles, beginning with a banner year in 2007-08.  About a week after Rivers’ departure, Danny Ainge hired former Butler head coach Brad Stevens to take the reins. 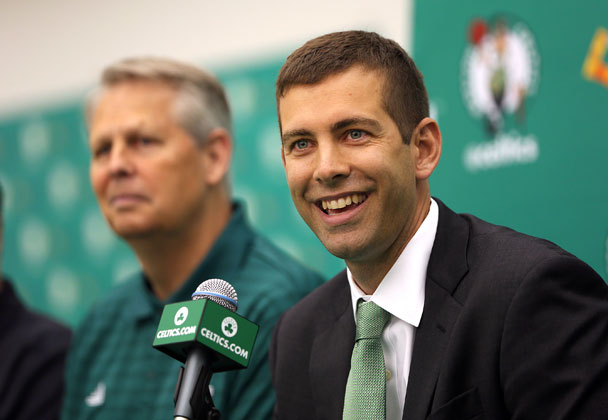 On July 12th, it was officially announced that Paul Pierce and Kevin Garnett (and that Jason Terry guy) would be dealt to the Brooklyn Nets in exchange for Marshon Brooks, Kris Humphries, Gerald Wallace, Keith Bogans and their unprotected first-round draft picks in 2014, 2016, and 2018.  The C’s also received the right to swap first-rounders with the Nets for 2017.

Brooklyn thought they were going all-in for a championship.  In reality, they were trading their entire future for one trip to the second round of the playoffs.  At the time of the deal, the Nets were considered to be title contenders.  The Celtics were getting ready head back to the NBA basement and start from scratch.  This is what the beginning of that journey looked like: 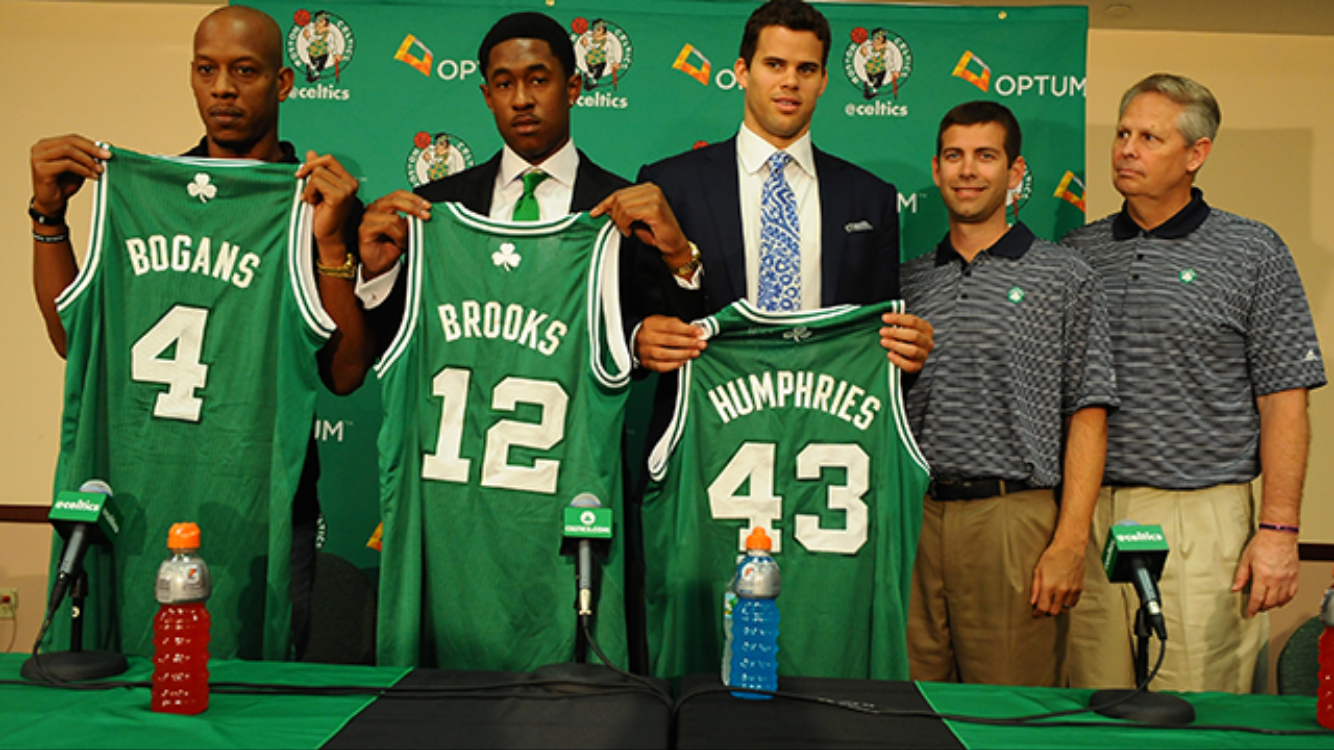 I remember people talking about how miserable Bogans, Brooks, and Humphries looked in this photo.  That’s okay if they weren’t happy here, because they definitely weren’t in Boston’s long-term plans.  They were just a small part of the beginning of Danny’s vision that would have the Celtics back at the top of the Eastern Conference less than four years later.

The 2013-14 Celtics were about as bad as everyone expected.  After Jordan Crawford and Jared Sullinger led them to a surprising 12-14 record through 26 games, including a Jeff Green game winner over LeBron in Miami, they went on to lose 16 of their next 19.  They would ultimately finish the season 25-57 and wind up in the NBA Draft Lottery for the first time since 2007.

Much like ’07, the ping pong balls didn’t bounce their way as they drew the number six pick in the draft.  That pick would become Marcus Smart, who has turned into one of the elite guard defenders in the NBA no matter what you think about his offense.  The Nets finished the season 44-38, giving the Celtics the 17th pick as well.  That one would become 18 year-old James Young, who’s yet to develop into a consistent role player although he’s still only 21.

It was hard to predict where the Celtics would end up in 2014-15.  Would they be better or would they play for the lottery again?  Rajon Rondo was fully recovered from his 2013 ACL tear and ready to play his first full season since 2011-12 when he averaged 11.7 assists per game.  We quickly learned, however, that a point guard who can dish but not score isn’t quite as effective when he doesn’t have Hall of Fame scorers around him.  By this time, Jeff Green had proven that he wasn’t capable of being a consistent offensive weapon, so there was no one on the team who could get buckets when you needed them most.

The C’s were 10-14 on December 19th when Rondo was dealt along with Dwight Powell to the Dallas Mavericks for Jae Crowder, Brandan Wright, Jameer Nelson, a 2015 first-round pick and a future second round pick.  Another great trade by Danny Ainge to collect more picks and assets, but at the time we were faced with the reality that Jeff Green and Jared Sullinger were now our best players.

That was until a month later when Green was traded to the Memphis Grizzlies for Tayshaun Prince, Austin Rivers, and another future first-round pick.  Three days later, the Celtics sent Rivers to the Los Angeles Clippers for Chris Douglas-Roberts, Shavlik Randolph, and a 2017 second-round pick.  Douglas-Roberts was waived three days later and Randolph was waived after appearing in just five games.  The Celtics were officially gutting their roster.

With all the roster changes and inconsistent lineups, the C’s struggled to find an identity and stumbled to 16-30.  It was another lost season, but on the bright side we had absolutely robbed some teams of draft picks in exchange for big-name players who were no longer living up to their potential.

Then Danny pulled off another miracle.  Just before the trade deadline on February 19th, he sent Marcus Thornton and a 2016 first-round pick to the Suns for Isaiah Thomas.  This deal was important because it gave the Celtics the reliable scoring option that they were looking for, but no one knew just how reliable he would turn out to be.  Looking back two years later, we sent a draft pick and a guy who’s currently averaging 6.6 points per game on 40% shooting in exchange for an MVP candidate.

The Celtics also sent Tayshaun Prince back to the Detroit Pistons, where he had spent the first 10 and a half years of his career, for Jonas Jerebko and Luigi Datome.  Behind the strength of IT’s offense and the defense of guys like Avery Bradley, Marcus Smart, and Jae Crowder (thanks Dallas), the C’s caught fire and went 24-12 the rest of the way, finishing two games under .500 and sneaking into the playoffs.  They got swept by the Cavs in the first round but lost every game by single digits.  As a fan, there was nothing to hang your head about.  Our team had just gone into rebuilding mode and managed to go through just one year of missing the playoffs before they became competitive again.  It made me thankful to root for a team who refuses to go through extended periods of losing.

The C’s made a steady improvement to 48-34 in 2015-16.  Isaiah Thomas made his first All-Star team and established himself as one of the best point guards in the league.  Unfortunately they fell just short of grabbing home court advantage and lost to the Atlanta Hawks in the first round in six games.

The biggest weakness for the Celtics in that series and all season long was their lack of a strong big man.  So what does Danny Ainge do?  He goes and gets Al Horford.

Combine Al’s presence with Isaiah Thomas’ ascension from All-Star to MVP candidate, and the 2016-17 Celtics have the best record in the Eastern Conference with nine games left in the regular season.  They’ve already matched their win total from last year, now their next step is to succeed in the playoffs.  That means winning a series at the least, but a Conference Finals appearance really shouldn’t be too much to ask.  If they can hold on to the 1 seed, then a matchup with Cleveland could all of a sudden become really interesting with home court advantage.

The fact that we’re even discussing this scenario is impressive considering we’re only 41 months removed from Doc, Pierce, and KG’s departure.  At that point Boston had retreated to the bottom of the NBA, but Danny Ainge has managed to put together a quicker rebuild than anyone could have asked for.  The Nets Trade of 2013 (aka the gift that keeps on giving) as well as the Isaiah trade of 2015 were two of the biggest steals that any GM has pulled off NBA history.

And who’s going to complain about Danny not making a deal at the deadline this year if the Celtics end up with the best record in the East and make some noise in the playoffs?  Rebuilding takes patience, so be thankful that we don’t have to be nearly as patient as most other fan bases.