Well this is the NBA finals that everyone expected, with little-to-no speed bumps along the way for each team. I thought that maybe the Bulls had a chance to knock out the slightly weaker Cavaliers thanks to Kelly Olynyk. But they once again proved that Lebron runs the East and I couldn’t be more disappointed that Paul Pierce and the Wizards didn’t get a shot at the king. The Hawks were a joke and I am not surprised at how badly these 8 seeds do against Lebron in the Playoffs. First the Pacers and now the Hawks. Both had great systems that earned them tons of wins in the season, but there is no leader that can hit the clutch shots when it matters. The fact that Lebron keeps mentioning these injuries after every game is so annoying. You are 30! You have like nine more years to talk about how your body is deteriorating. Anyway, I am not surprised that the Cavaliers are in the finals because Lebron does know what to do in these moments. Take as many shots as possible.

Now on to the important stuff. Stephen Curry is a man (who may look like a boy) among boys. Yeah James harden had the most turnovers in a game in postseason history, but that is his and Lil B’s problem. Curry was shooting his best field goal percentage in the Houston series at 51.5% while Lebron was 43.8% from the field. Lebron also took an average of 6 more shots per game and Steph averaged one point more in the series. Just a look at how Steph is just starting his demolition and Lebron may be fading. Anyway, I can’t keep getting back to my hatred of Lebron. The Warriors are obviously the better team with players like Draymond Green’s harassing defense, Harrison Barnes’ new found shooting stroke, and Andrew Bogut’s rim protection. For some reason, I absolutely love the way Bogut plays. He is one of the best passers on a passing team, blocks 1.9 shots a game, and gets the rebounds this small team needs. He always seems to be on the same page as Klay and Steph as well. He either picks for them and rolls for an easy two points or gets a pass and feeds one of the two shooters perfectly. This team’s system is so perfect for two shooters like Klay and Steph. 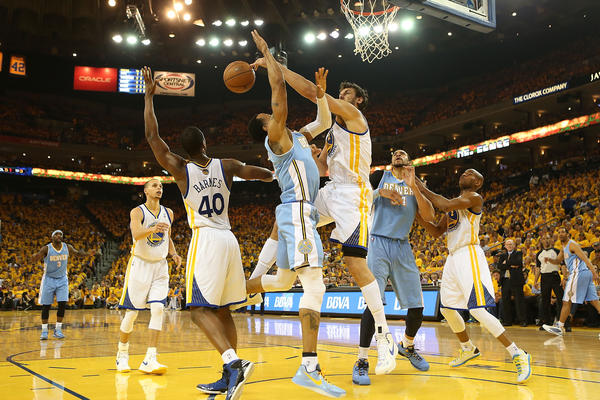 But to be honest, these finals will be all about Stephen Curry vs. Lebron James. Take a look at Stephen Curry’s shot chart and you will be amazed at the numbers. From the corner, he is close to 60% from three. By the way, at the rim he is about 49% so maybe give it to him in the corner guys. But I hate when people looks strictly at numbers. The fact of the matter is he can score from anywhere as proven by his 3/4 court shot at halftime in Houston. But he knows his strengths are dribbling and getting that eight inches of space he needs to splash his shots. To be honest, my favorite part about his game is when he fakes the three, drives to the hoop and does a scoop shot off the top of the backboard to get two and usually a foul. Since his days in Davidson, I always knew he would be one of the greatest shooters, but his assisting and ability to drive are the two facets of his game that have improved tremendously. I am seriously giddy about these NBA finals and I never use that word.