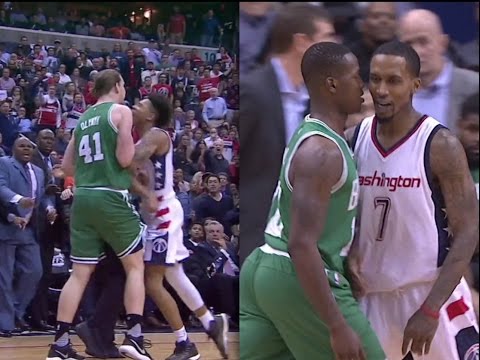 If you’re a fan of the Celtics you know that every time the playoffs roll around, you’ll inevitably develop a certain level of hatred for a player or players on the opposing team.  As of Thursday night’s loss in DC, the Wizards’ Kelly Oubre Jr. and Brandon Jennings have officially taken on the roll of villain.

Both of these guys had issues with the Celtics and their fans before this series even began.  Jennings got into it with Terry Rozier during a regular season game back in March:

After that same game, which the Celtics won 110-102, Kelly Oubre Jr. almost went after a Celtics fan on his way back to the locker room before a teammate pushed him away:

These instances were only a small part of what has been a year-long feud between these two teams, but there’s no doubt that Jennings and Oubre Jr. have been the instigators on Washington’s side.

After the Celtics beat the Wizards in Game 1 of the Eastern Conference Semifinals last Sunday, the Los Angeles Clippers lost Game 7 of their first-round series with the Utah Jazz.  This meant the end of Paul Pierce’s 19-year career, resulting in the 39 year-old deservedly being showered with love from all around the league.  The Truth is the second-leading scorer in Celtics history and managed to rack up 10 All-Star appearances, two Finals appearances, an NBA Championship, and a Finals MVP thanks to endless amounts of clutch shots.

Brandon Jennings’ prime ended three years ago when he was 24 after five years of relevance in the NBA.  This season, he was so bad that he was actually waived by the 31-51 New York Knicks before the Wizards brought him in.  He’s averaging 7.1 points on 35.9% shooting for the year.

Still, Jennings somehow thought he was qualified to disrespect Pierce after his retirement:

He quickly realized how stupid he looked and deleted the tweet, but it was too late.  The comment itself was bad enough, never mind it coming during a series against the Celtics.  Jennings knew exactly what he was doing.  He can’t play anymore so his only attribute is talking shit.

The Celtics then beat the Wizards behind Isaiah Thomas’ 53 points in Game 2 before the series went to Washington.  That’s when things got chippy again.

First, Kelly Oubre Jr. once again had trouble controlling his emotions as he lost his cool after a “hard screen” by Kelly Olynyk:

Oubre was ejected from the game and has officially been suspended for Game 4.

In the fourth quarter, with the Wizards blowing the Celtics out, the Brandon Jennings-Terry Rozier beef was renewed:

The Washington Wizards are led by John Wall and Bradley Beal.  Brandon Jennings and Kelly Oubre Jr. are a couple scrubs at the end of the bench who have apparently both taken on the role of enforcer.

If you want to know how the Celtics feel about this, look no further than Gerald Green’s post-game comments:

Gerald Green has only one thing in mind for the teams' next game. pic.twitter.com/uC16oUCsqu

7 thoughts on “Due To Limited Basketball Skills, Brandon Jennings And Kelly Oubre Jr. Have Taken On The Enforcer Role For The Wizards”