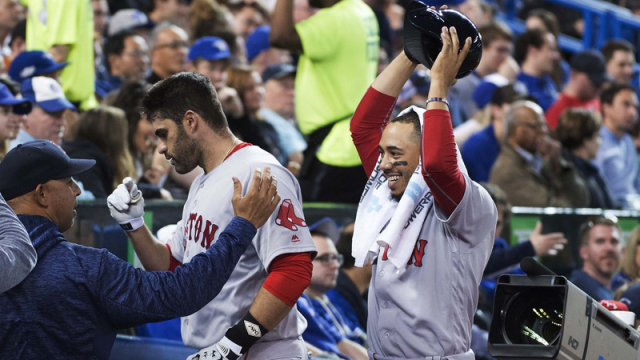 The Red Sox currently have the best record in baseball.  Exciting, right?  You would think.

Unfortunately, the after-effect of the last two seasons still lingers in the minds of fans and media.  Back-to-back American League East titles capped off by Division Series exits.  A 1-6 record in their only two postseason appearances over the last five years.

Some of their most glaring issues during that span remain present.  David Price still can’t pitch in big games.  He showed us that in New York last week.  The middle-relievers are shaky.  Jackie Bradley Jr. can’t get into a groove offensively.

Last year the Sox finished the regular season with a total of 168 home runs and 735 runs batted in.  They were manhandled in the first round by an Astros team that put up 238 and 854 and went on to win the World Series.

The biggest key to that turnaround is the addition of JD Martinez, who’s on pace for 50-plus home runs and 140-plus RBI’s.  But that’s only part of it.  The Sox have five players on their roster who are on pace to hit more home runs than anyone did for them last year, when Mookie led the team with 24.

This year, Mookie is well on his way to 40-plus.  Xander Bogaerts, Rafael Devers, and Andrew Benintendi could all hit 25-plus if they continue their current level of production.  Then you have first-time All-Star Mitch Moreland chasing 20-plus and 80-plus while currently hitting .288.

The Sox have plenty of talent on their pitching staff, and if guys can get hot at the right time then they can make a run to the World Series.  Bring Price out of the bullpen in October.  Do whatever you need to do.  But barring a complete catastrophe, this offense is enough to carry them all the way.