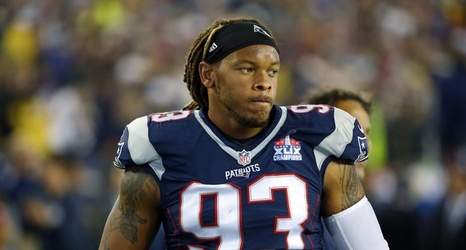 Prior to last week’s loss against the Seahawks, defensive lineman Jabaal Sheard had been on the field for 69.4% of the Patriots’ defensive snaps.

Last Sunday night against Seattle, Sheard saw just 16 snaps, which may have been the beginning of the end of his days in New England.

According to his Instagram post on Friday night, Sheard did not travel with the team to San Francisco.  While the rest of the Patriots were on their flight, he was back in Boston at the Celtics game.

Sheard is just the latest big name on the Pats’ defense to disappear in the last few weeks, as Pro Bowl linebacker Jamie Collins was traded to the Cleveland Browns for a third-round draft pick in late October.  Bill Belichick drew a fair amount of criticism for that move, and that criticism was somewhat justified in the loss to Seattle as the Patriots allowed 420 total yards to the Seahawks’ offense.

At the same time we probably shouldn’t judge the move off of one game, let alone a game against one of the only really good teams that the NFL has to offer.  Clearly the loss hasn’t stopped Bill from putting his foot down and showing players the door whenever he feels like it.

Jabaal Sheard was an important part of New England’s defense in 2015, but his 2016 hasn’t been up to Belichick’s standards so he’s getting the boot.  Of course we don’t know all of the behind the scenes stuff, and there could have been some locker room turmoil that we’re unaware of, but I personally didn’t know that Sheard was under-performing this year.  Then again, I didn’t realize Jamie Collins was having a bad year either until we shipped him to Cleveland for a bag of balls.